Finding Your Own North Star : a review


Finding Your Own North Star: Claiming the Life You Were Meant to Live by Martha Beck (2001) 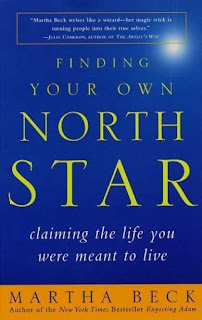 I’m not really into self-helpy books, but I’ve been reading some career-related guides so I keep veering into this territory. This one was recommended by a career book I read recently and when I saw who the author was, I ordered it through the library. Martha Beck wrote really good memoir about having a son with Down’s syndrome and I was interested to read her writing again.

Finding Your Own North Star is a guide to figuring out what you want in life. Not just your career, though, it’s all about the way you live your life in general. Beck emphasizes differentiating what you actually want from what your family, friends or society focus on. She addresses emotional issues such as working through loss and change, and provides many questions to ask yourself to figure out what you want to do in your life.

Parts are a bit hokey and I found myself skimming occasionally and rolling my eyes once or twice. The jargon is a bit much for me, with her repeated references to one’s “north star” “essential self” and “social self,” though I’ll admit they are useful terms. The author has a chapter on intuition in which she talks a bit about psychic abilities. She also believes in the annoying yet pervasive idea that if you are passionate about something you will become wealthy from it (an idea discounted by the book that referred me to this one), though at least she acknowledges that passion and interest aren’t enough by themselves to lead you to wealth.

Despite the detractions, I found her writing humorous and many of her ideas useful. I thought she had some good questions to ask when trying to figure out your life and how to be happy. Not that I worked through any of these exercises, mind you.

I have a friend from an old book group who reads a lot of self help books but freely admits that she doesn’t actually follow their advice. That’s actually a pretty healthy way to approach these books, I think. Just take whatever little nuggets are interesting or useful to you and remember those, but don’t worry about the rest of it. Now, off to try and develop my psychic powers…
Posted by 3goodrats at 7:59 PM

"That’s actually a pretty healthy way to approach these books, I think. Just take whatever little nuggets are interesting or useful to you and remember those, but don’t worry about the rest of it."

This is how I approach religion as well...