The Tower The Zoo and the Tortoise : a review 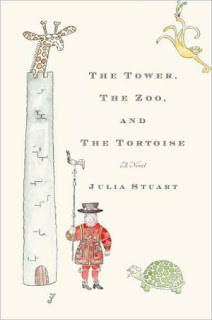 Balthazar Jones is a Beefeater at the Tower of London where he lives with his wife, Hebe, and a 178-year-old tortoise named Mrs. Cook. When the Queen decides to move her menagerie from the London Zoo to the Tower, Balthazar is put in charge of the numerous and varied animals. The logistics prove difficult, and not all residents are happy with the arrangement, especially the jealous Ravenmaster whose charges are subsequently overlooked in favor of the more exotic animals.

Meanwhile, various comical situations and ill-executed romances are brewing among other characters, including Valerie Jennings who works with Hebe in the London Underground’s Lost Property Office. Here the two women spend their days trying to find the owners of various amusing objects that have been left behind on the Underground, providing ample opportunity for the introduction of eccentric minor characters.

But not all is humor and fun at the Tower of London. At the heart of the story is the disintegration of Balthazar and Hebe’s marriage after the death of their only child, Milo, the details of which are revealed slowly throughout the course of the novel. Though Hebe has tried to talk to Balthazar about Milo, he is too overcome with guilt to do so, leaving Hebe frustrated and alone in her grief.

This book hooked me in from the very first paragraph. I enjoyed the colorful characters, the details of English history slipped in at every opportunity, and the way Stuart wrapped a rather sad story in such a light, humorous coating. Many of the characters – such as the Rev. Septimus Drew, or the landlady Ruby Dore – were so interesting that I’d be happy to read a whole book focusing on each of them as well. Quirky and delightful!


(P.S. This blogger hated it, and for some of the same reasons that I loved it. Interesting!)
Posted by 3goodrats at 9:54 AM

Labels: books, julia stuart, reviews, the tower the zoo and the tortoise