World Made By Hand : a review

World Made By Hand by James Howard Kunstler (2008) 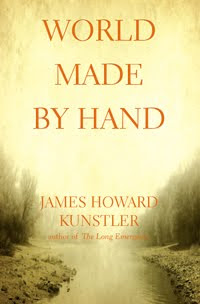 Sometime in the unspecified future, the people of Union Grove in upstate New York live without law, electricity, oil, news of the outside world, or many other things we all take for granted today. Robert has lost his whole family, as so many others have, but still struggles on trying to create a life of normalcy. He and his peers remember the old days of computers, cars, and corporate jobs but for younger folks this is the only life they have known. When a young man from the town is shot over a misunderstanding, some members of the community decide that the lawlessness has gone on long enough. Their new sense of justice spurs clashes that result in minor tragedies, but Robert and his neighbors are determined to build a society run on order, not fear.

Religion unsurprisingly takes on a larger role in this broken society full of desperate people. One of the major plots involves Brother Jobe and his New Faith followers moving into Union Grove after fleeing the violence of the South. Though many in the town (including Robert) are wary of religion, it becomes clear that the New Faithers want to integrate into the peaceful community and by the end of the book they seem to be forging an alliance.

I didn’t quite understand what had happened to the world, and if it had happened everywhere or just to the US. There was mention of bomb attacks on a few different American cities, and I’m not sure if that’s why the US no longer had oil or if it’s because there was no oil left to be had (see: James Kunstler’s non-fiction work The Long Emergency). Illness was rampant, and had claimed many lives including Robert’s wife and daughter. But I couldn’t quite connect how these events led to the society described in the novel.

This wasn’t the best post-apocalyptic book I’ve read, but it wasn’t terrible. I liked that this future isn’t a dystopia. It’s not an easy life, but many of the characters don’t miss the “old times” much at all. Unfortunately, none of the characters were developed well enough for me to care about them. I think this could have been a much better book than it was, (and the trailer makes it looks appealing) but it fell flat and left me a bit disappointed.
Posted by 3goodrats at 8:42 PM