One Day : a review 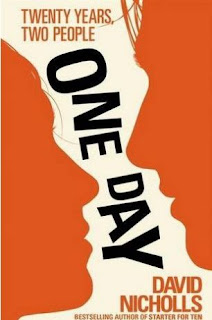 Over the course of almost 20 years, we visit Emma Morley and Dexter Mayhew on the same day, and only one day, of every year. We first meet them upon their college graduation when they have stayed up all night together, and from this day their friendship grows. It takes many turns over the years, stronger at times, frequently tinged with sexual tension, occasionally appearing to be over entirely. Though they live very different lives - Dexter a famous tv presenter with a glamorous lifestyle while Emma teaches and struggles as a writer – they still manage to retain a bond.

When I first heard the premise of the book I was skeptical, thinking it was just a gimmick. Rather, it is a clever storytelling technique. Visiting the two characters on the same date every year guaranteed that many of the important events of their lives happened in between and were referred to or remembered, rather than described directly to us. In this way Nicholls focused less on the facts of their lives and more on how each character has changed, which only strengthened the novel. I’ll admit there were times when I wondered how their friendship still survived – or, more to the point, what Emma saw in Dexter – but their relationship was so compelling I literally did not want to put this book down.

As with most books that span so many years, I became heavily invested in the characters, and I don’t think it’s an exaggeration to say that when I finished this book, I felt a profound sense of loss. It could have been PMS, but I’m pretty sure it was the mastery of David Nicholls’ writing. As painful as some parts were to read, I can’t imagine any other way the story could have gone. Nicholls really got it right.
Posted by 3goodrats at 9:45 PM