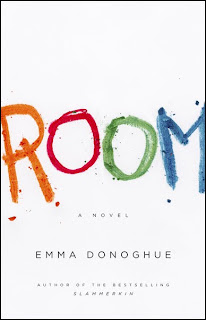 Jack and his mother live in Room, and Room is all that Jack has ever known. But his mother hasn’t always lived there – she was taken by Old Nick who locked her away where nobody could find her.

The voice of Jack narrates the story, roughly half of which took place inside the room in which Jack has lived all of his five years, (and his mother even longer). The other half was their adjustment to the outside world, a world completely new and overwhelming to Jack, filled with loud noises and complicated rules.

Writing from the view of a small child is risky, and so rarely successful. I read an interview with the author in which she explained that she had a child Jack’s age when she was writing this, and she borrowed some of his speech patterns and even made him roll himself up in a rug to see if he could get out. Clearly it was well researched, and that paid off.

Room is a great book – not in a literary award sort of way, but in an unputdownable way, which in my opinion is what counts. I can’t do it justice here, or adequately explain why you should read it but trust me, you should.
Posted by 3goodrats at 8:58 PM