The Basset is a hardy beast, we vow our loyalty to the end

The Disreputable History of Frankie Landau-Banks by E. Lockhart (2008) 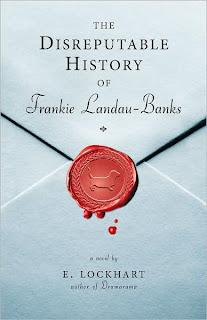 The admissions department at Alabaster Prep had no idea what they were getting into by admitting Frankie Landau-Banks to their school. Sure, Frankie was following family tradition by attending the school, but there were other traditions she was less content to follow. Take the Loyal Order of the Basset Hounds, for instance. This secret society was responsible for many brilliant pranks over the years, but its male-only membership insured that Frankie could never take part. Or did it?

As Frankie begins her freshman year at Alabaster, Matthew Livingstone finally notices her, thanks to what her mother euphemistically refers to as Frankie "filling out" over the summer. As much as she enjoys the attention of her new boyfriend, Frankie continues to be frustrated by the assumptions everyone makes about her intelligence, her interests, the kind of person she is, her vulnerabilities. Even Matthew and his friends don't seem to take her seriously or understand what she is capable of. But before the year is out, Frankie will show everyone at her school exactly what she is made of.

Frankie is a brilliant young woman, but still down-to-earth and quirky. I love that she regularly uses neglected positives: maculate, the opposite of immaculate; sufferable, the opposite of insufferable; and so forth, her favorite being the false neglected positive "gruntled" which she picked up from reading P.G. Wodehouse. I love that she reads P.G. Wodehouse.

Matthew doesn't seem to appreciate her worth, and honestly their whole romance was rather unconvincing. We were told, rather than shown, how much Frankie loved him. But this was a minor plot point, as I imagine that romance would always be a minor plot point in Frankie's life. She has more important things to do.

Not that Frankie has everything figured out. She is so focused on her antics she doesn't think through the consequences. And though confident, she still turns to her older sister Zada for advice. My favorite piece of wisdom? When Matthew gives Frankie a t-shirt Zada says "he's marking his territory, like a dog peeing on a fire hydrant."

The novel opens with Frankie's letter of confession as the sole mastermind behind such mal-doings as the Night of a Thousand Dogs, the Canned Beet Rebellion, and the abduction of the Guppy. Are you inspired by students who practice civil disobedience against a patriarchal establishment? If so you'll love this story of how a young woman, whose well-meaning parents continue to call her "bunny rabbit," manages to seize control of a secret society and manipulate it to her own ends. And as she says in her letter, "I am not asking that you indulge my behavior; merely that you do not dulge it without considering its context."
Posted by 3goodrats at 10:34 PM