I made a ridiculous error on my second sleeve. You know how you are knitting along, not having read the entire pattern all the way through first, and suddenly you come to the words "At the same time" and realize you were supposed to be keeping track of how many cable pattern repeats you've been doing? Well, that's not exactly what happened because I've already knit one sleeve so nothing here should be a surprise to me.

On the first sleeve I read far enough ahead to know there was a "same time" situation. It was a confusing one, I'll admit, because at first it was unclear what it was at the same time AS. I started the sleeve with its cable pattern, I did the short row sleeve caps, and then began the decreases. So when it said "at the same time" to work the cable chart a certain number of times before starting the second cable, at first I thought it meant to count the pattern repeats since I started the decreases. It seems obvious now that that makes no sense, but usually "at the same time" means at the same time as the last thing you were just doing. But I soon understood it meant ALL the pattern repeats on the sleeve and thought, how fantastic that I figured this out now before screwing up. 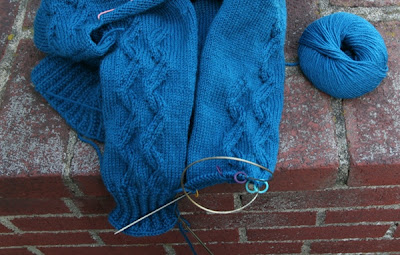 Then I started the second sleeve and immediately forgot everything from the first. So I'm knitting happily along and one evening I thought you know, I'm supposed to start a second cable at some point. I wonder when? Turns out the answer was: about 30 rows ago.

So commenced the crying and gnashing of teeth and confusing math exercises, after which I very carefully ripped out a large section of sleeve - not easy when cables and decreases are involved. The most frustrating part of it all is that it was so unnecessary. There was no reason for me to make such a mistake when I had already successfully completed one sleeve without incident. Had it happened on the first sleeve it would have been forgivable.

But all that's over now and the sleeve has been completed. All that's left on this baby is the neckline and I'll have myself a new sweater.
Posted by 3goodrats at 10:10 PM