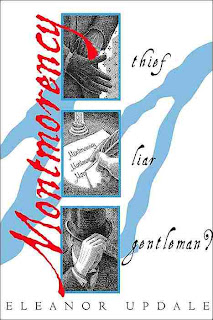 He never reveals his real name, but has chosen Montmorency from a label on his clothing. Arrested after he falls through a glass ceiling, he was seriously injured. The doctor who put him back together is so proud of his work that he takes Montmorency from prison now and then to be displayed at his public lectures. It is at one of these lectures that Montmorency learns of the new underground sewer system in London, and begins making plans for after his release from prison.

This new sewer system allows him access to –and escape from – nicer areas than he has thieved in before. This means more expensive treasures to sell, and he can’t sell them as a ruffian. So he divides himself into two personas: Scarper, the thief, and Montmorency, a gentleman.

This is considered a young adult book, but I’m not sure why. I thought at first that Montmorency was teenaged, but as he traveled more in upstanding society the people he associated with were definitely adults.

I always like stories set in the Victorian era, and there were some interesting elements here, like the new sewer systems and some bits about contemporary medicine. But there wasn't a lot to love. Montmorency/Scarper was fairly two-dimensional. I was less bothered about not knowing his real name than the fact that I knew nothing else whatsoever about him - there was just no context for his life, not even a passing reference to his childhood or family, as though he was born in prison.

This book is the first in a series, and although it was mildly entertaining I don’t feel compelled to continue. Has anyone read this series beyond this book? Does his character become more developed? I like the idea, but was just disappointed by the execution.
Posted by 3goodrats at 7:55 AM