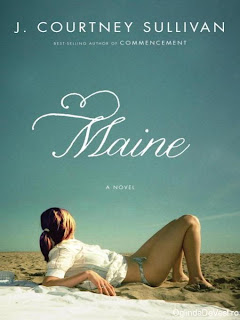 Ever since they won land in Maine on a bet, the Kelleher family has vacationed there every summer. But this year things are different for the three women around whom the novel is focused. Alice, the matriarch of the family, has just promised to donate the property to her church, as a way of finally atoning for her long-held secret guilt. Her daughter-in-law Ann Marie is focused on winning a dollhouse competition, spending thousands of dollars on supplies, and meanwhile harboring a bit of an obsession with a man who is not her husband. Maggie, Alice's granddaughter, is pregnant and newly dumped by her boyfriend.

None of the characters were appealing enough that you'd want them in your life, but they are all a little bit interesting in their own ways.

My favorite part of this book was Alice's back story, and it was worth reading just for this bit. As unlikeable as she can be as an elderly woman, her history explains a lot. She has dark secrets that have motivated her entire life path in a way that was in complete opposition to what she wanted. I loved even the minor details about her early life. For instance, when she was a teenager her family had a party line and Alice would spend hours listening to a young single woman in Beacon Hill talk about her life. Alice thought the single city life was incredibly glamorous and followed Trudy's adventures the way someone would a tv show.

Ann Marie was easy to imagine as real - a woman who is dissatisfied with her life and focuses on minutiae to distract herself. She spends money compulsively, and has lots of opinions about other people and their problems while not dealing with her own. I found myself feeling supportive of her dollhouse hobby, simply because she was channeling her energy towards something creative that she seemed to enjoy.

Maggie was the least interesting, and I felt she was simply not fully formed yet. I kept thinking of her as freshly out of college though she was actually around 30. The most interesting aspect of Maggie was actually her mother - Kathleen was an alcoholic, now sober and living on a worm farm (the composting type of worms) with her long-term boyfriend. She used to read Maggie's diary AND write notes in the margins. They've always been a little too close, yet Maggie has a hard time getting around to telling Kathleen about her pregnancy.

Maine was a fairly typical domestic novel exploring family tension. I almost put it down after the first couple of chapters because I didn't find it compelling enough. But then I came down with a horrible cold and was stuck on the couch all day and read over a hundred pages. It was a good book to read while sick. It would be a decent beach book too, given the setting, the laid-back pacing, and the simplicity of the story. Not bad, but I won't count it among my recent favorites.
Posted by 3goodrats at 7:57 PM