A touching story of sibling love

...or a love story of siblings touching? 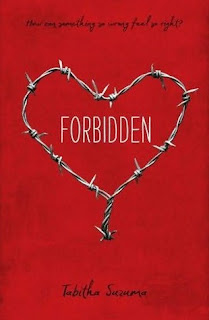 Maya and Lochan are the oldest of 5 children and are stuck running their household. Their father left several years ago and their mother has a drinking problem and a new boyfriend and hardly even comes home anymore. Lochan, although academically gifted, is painfully shy and a social outcast. Younger brother Kit has begun hanging out with a rough crowd, staying out late, smoking pot and being generally disagreeable. Unpaid bills pile up, and it's a struggle to take care of the younger kids and fly under the radar of social services. Their dire situation draws Maya and Lochan closer, and soon they are fighting the romantic feelings they have towards each other. Eventually they give in and begin a secret relationship.

Clearly, this won't end well. It is obvious that Maya and Lochan cannot live happily ever after and I spent much of the novel thinking of the myriad ways in which their relationship could implode. The buildup was fantastic, but by the time the inevitable occurred it felt overly dramatic and cheap. Maybe I was just picturing the Jerry Springer-like coverage that would accompany this story in the real world.

Mostly I really liked this book - I felt genuine sympathy for these kids and their desperate struggle, and though incest is a generally distasteful topic I'm glad Suzuma went there. Hardly anybody else does and it's good to have a theme that hasn't been rehashed to death. This isn't like the crappily written Flowers in the Attic either. Maya and Lochan are likeable people, fully aware of the consequences of what they are doing, and they have some really interesting conversations about the rightness or wrongness of it. (Summary: they aren't hurting anyone. True.) Also, they are British! The story took place in England and the kids wear uniforms to school and say fun words like "knickers." Knickers did come up in this book several times, as you can imagine.

The bare bones of the story reminds me of Ian McEwan's The Cement Garden, in which a family of children were left parentless and the two eldest became romantically involved. That is where the similarities end, but I couldn't help thinking of it while reading Forbidden. I'm sure it's just because incest is so rarely tackled in novels. It may be the last true taboo.

Though well over 400 pages, Forbidden is truly a page-turner and took me just a few days to read. The chapters alternate between Maya's and Lochan's perspectives, and though their voices were almost indistinguishable, their personalities weren't. I liked reading all about their family, their problems at school, and their failed attempts at dating other people. I'm sorry things ended in the mess they did, but that is just the world we live in. At least it's a world full of good scandalous books.
Posted by 3goodrats at 6:50 AM

For a little while in the nineties (and maybe a few years after)movies were more often engaging with incest as a topic (The Sweet Hereafter, Lone Star, The Royal Tannenabaums, Angels and Insects). I thought it was pretty brave of them.