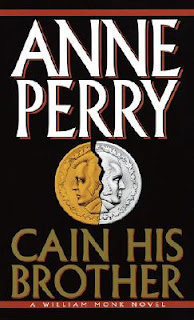 I'm slowly working my way through this series of Victorian-era mysteries featuring William Monk. This one centers around twin brothers, one a gentleman and the other a n'er-do-well inhabitant of the poor rough neighborhood of Limehouse in London. Angus and Caleb long had an antagonistic relationship, but despite their distaste for each other, Angus didn't hesitate to visit Caleb in Limehouse to lend him money when needed. When Angus goes missing, his brother Caleb is suspected of murdering him. Of course nothing turns out to be at all what was suspected, as William finds out during his investigation, assisted by a cast of familiar characters including lawyer Oliver Rathbone and nurse Hester Latterly.

I liked this novel less than the others I've read so far in this series, primarily because Hester wasn't featured as prominently. It was mostly centered around Monk and Rathbone and although I like them, I much prefer Hester. We got a bit of Hester's life here and there as she nursed typhoid victims in Limehouse, but didn't spend nearly as much time with her as I'd like.

This case involved twin brothers, and I suspected the outcome about 100 pages from the end. I'm pretty oblivious with mysteries and rarely even try to guess the outcome of books so I suspect this one was unusually predictable. There are just a couple more from this series I need to tackle in book form before I can get back to the audiobooks. Hopefully I can catch up in time to listen to these mysteries while doing some winter knitting!
Posted by 3goodrats at 8:16 AM