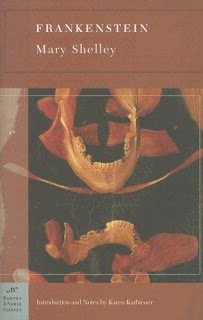 In case you missed it in high school, here is the synopsis: an arctic explorer named Walton is writing letters to his sister about his voyage, during which he sees a large, strange figure moving across the ice on a sled. Later he sees another man also traveling in the same direction in pursuit. This man is forced to stop his chase and come aboard. He is ill, but manages to tell his story to Walton, who relays it to his sister. The man, Victor Frankenstein, was obsessed with his scientific studies and his quest to create life. He eventually found the secret - conveniently not revealed in the novel - and builds a man. When the monster comes to life Victor is immediately horrified and flees. For years the monster is shunned and miserable about his situation and seeks to hurt Dr. Frankenstein who brought him to cursed life and then didn't stick around to keep him company. He starts killing people who Frankenstein cares about but promises he'll stop if a woman is created to be with him. Frankenstein will not do so and the whole thing is a suspenseful yet bleak journey towards destruction.

This was my second reading; I read it in high school and really liked it a lot. This time it was for my book group and upon rereading it didn't have the same effect. I knew what was going to happen and acutely felt the impending doom, which was only amplified by the incessant rain we had that week. I suppose this bleakness and suspense are the point though, right?

The novel is also fairly melodramatic, and the language was formal and a bit tiring. But it's pretty amazing taken in its historical context. Frankenstein is considered the first work of science fiction and it was written by a teenage girl. Amazing! Her life is also really interesting, although tragic, and she was a prolific writer. I'm kind of interested in what her other writing is like, but I'm not sure if I'm up for it. Has anyone read her other works? How do they compare?
Posted by 3goodrats at 9:28 PM