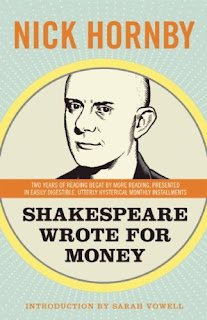 My book group recently chose to read Nick Hornby's third and final collection of his monthly Stuff I've Been Reading column from The Believer magazine. I thoroughly enjoyed his first two and this third volume did not disappoint. For those who are unfamiliar, he begins each column with a list of the books he bought that month and a list of the books he read that month. Sometimes there is overlap. Then he discusses the books in an essay, and I add more titles than I can ever read in my lifetime to my Goodreads list.

Some of the books discussed in this volume include The Abstinence Teacher by Tom Perrotta, On Chesil Beach by Ian McEwan, and most memorably, Cormac McCarthy's The Road. Hornby urges his readers to go with their instincts on this last one - if you don't think you want to read it, don't. In describing just how difficult a book it is to read, he says  "Sometimes you feel like begging the man to use his last bullet on you, rather than the boy. The boy is a fictional creation, after all, but you're not. You're really suffering."

I love Nick Hornby for many reasons, but I think most of all for his unpretentiousness. In this volume he has discovered young adult literature, which of course endears him to me even more, but what he likes about it is that it's so incredibly readable. He also discovers the Alex Awards from YALSA, given to adult books with appeal to teens. As Hornby describes it, "a list of ten books that aren't boring." Hornby read and enjoyed Skellig by David Almond, Weetzie Bat by Francesca Lia Block and The Absolutely True Diary of a Part-time Indian by Sherman Alexie, just to name a few of his young adult choices.

Another takeaway for me from this book was what he said about reading from a list. He came across some book to the effect of 1001 Books You Must Read Before You Die, and says "reading begets reading - that's sort of the point of it, surely? - and anybody who never deviates from a set list of books is intellectually dead anyway." I have a fairly lengthy list of books to read and too often I consider it more of an assignment that I need to get through than a list of interesting sounding titles I don't want to forget. Hornby's words were a good reminder to deviate from that list and read whatever I feel like at the moment. I certainly don't want to be among the intellectually dead.

And this book surely begets more reading - I've already read David Almond's Skellig (in one sitting, no less). I'll tell you all about it soon.