Love Warps the Mind a Little

Love Warps the Mind a Little by John Dufresne (1997) 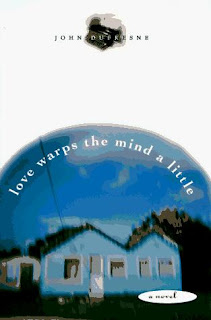 Lafayette Proulx is not only struggling as a writer, but he's also failing at his marriage. The day his wife tells him to leave he packs up and goes the only place he can think of, his girlfriend Judi's house. He feels torn, truly he does. He's invested many years with Martha but isn't sure he still loves her; he doesn't think he wants to commit to Judi either. But he has to be with one of them because after quitting his full-time teaching job to write, his recent job at a restaurant isn't enough to pay the bills. So he stays at Judi's house even after he begins marriage counseling with Martha, thinking maybe they can work things out. Then Judi is diagnosed with cancer and Laf pitches in to help and finds himself more permanently fixed in her household, and more invested in their relationship.

On the surface Laf is a freeloader, living first with one woman, then another, contributing nothing financially to either arrangement. But I couldn't help being sympathetic with him. For one thing he is a good writer, despite not being able to be published. He's very involved in his work and we learn a lot about the novel he's working on, which in many ways parallels his own life. He's obviously very smart and his writing apparently reflects his thoughtful and philosophical nature. So it's not ridiculous that he has given up so much to write; it's his life. He observes, "Nothing begins with so much excitement and hope and pleasure as love, except maybe writing a story. And nothing fails as often, except writing stories."

Aside from his merit as a writer, I found Laf to be an endearingly flawed character. He's honest (to us, if not to the women in his life) about his shortcomings and his attempts at self-preservation. But while he's fairly selfish on the surface, he shows incredible compassion as Judi becomes sicker and truly goes above and beyond what is required of someone at that stage of romantic attachment.

Judi's family members are over the top in their eccentricities, and combined with Martha's emotional neediness it's all wonderfully messy and complicated, and even a little poignant at times. Dufresne writes with the self-deprecation of Nick Hornby and the quirkiness of Douglas Coupland, making this funny and sad novel thoroughly enjoyable.