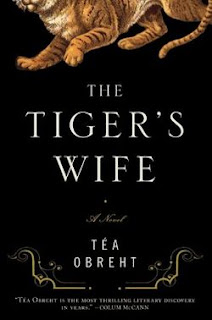 This much-lauded novel from young Croatian author Téa Obreht begins with the main character, Natalia, telling a story about visiting tigers in a zoo with her grandfather when she was a child. It then moves to the present time in which she is en route to an orphanage with her friend Zora to administer vaccinations, and learns through a phone call that her grandfather has died.

Throughout the trip she thinks back to stories of her grandfather's youth during which his village was frequented by a tiger. Most of the book consisted of these flashbacks, with just an occasional bit set in Natalia's present. These stories had a mythical quality to them, focusing as they did on a man who could not die and a mysterious woman referred to as the tiger's wife who everything in the village believed did, in fact, have some sort of relationship with the tiger.

The village tales were nicely composed, but not really my taste. I preferred the current story about Natalia and her experiences as a young doctor in a war-torn country. There was little of this aspect of the story however, which is disappointing because I found Natalia intriguing and wanted to learn more about her life.

This was the sort of novel through which you move very slowly, but enjoy taking in all the scenery along the way. Her writing is beautiful and even after the novel became tedious to me I was rewarded with some truly lovely passages at the end. Although it wasn't my cup of tea, I can see why the book received so much praise.