I'm just back from my Thanksgiving trip to Maine, but managed to get a picture of my sock while I was there and it was daylight. 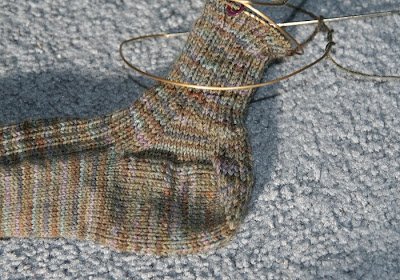 It looks a little misshapen here, but I swear it looks totally normal when I put it on my foot.

As planned, I used an extra strand on the heel flap on the bottom which I knit on the drive up (I wasn't driving at the time) and also on the heel turn, which I did at my mother's house after we arrived. I have an inconvenient problem with reading in the car, in that it makes me incredibly ill, so I can't do any knitting that involves closely following instructions. Anyhow, the double-stranded parts feel very tough, which makes me hopeful that they won't wear through immediately.

After the heel turn, I went back to the single strand and knit the back heel flap and gusset, which you can tell from the photo is very short. This is a new construction for me so I'm not sure if that's how it's supposed to be but I tried the sock on and it fits, so I'm happy with it.

On the drive back I knit most of the leg - I think maybe one more inch I'll be ready to start the second sock!
Posted by 3goodrats at 8:36 PM