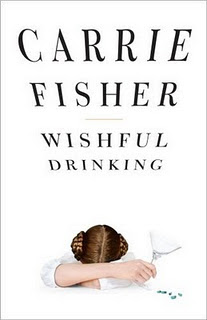 There are several important things I didn't know about Carrie Fisher.

1. She was once married to Paul Simon
2. She wrote Postcards From the Edge
3. Her parents were Eddie Fisher and Debbie Reynolds

In summary, all I knew about her before listening to this audiobook was that she played Princess Leia in Star Wars, so this book was a good education for me.

Carrie Fisher is like your crazy aunt who gets too tipsy at family gatherings and tells inappropriate stories. (The aunt I will probably be someday, possibly later this week.) I don't normally like when people trot out their histories of drug abuse, childhood problems, and electroshock therapy, but she really is a very good storyteller and so clearly isn't asking for pity or trying to make excuses for her behavior. In the author's note at the end she talks a little about the stigma of mental illness and says that those who suffer from these problems shouldn't be ashamed; in fact, they should be proud that they are able to actually function and live their lives. And that's how she comes across in her narrative - she seems very happy that she is functional, but at the same time finds it all perfectly hilarious.

This audio version was read by Fisher, and of course no other narrator could do it justice. Rather than focusing on any one part of her life, it was a meandering sort of monologue that was quite conversational and lent itself well to an audio format. It was more of a performance than a memoir and, indeed, is based on a show that she's been doing for a while. Her voice sounds kind of rough, as though she's been smoking for 70 years or so, but I really enjoyed listening to her. It was pretty short, but very informative and enjoyable and funny.