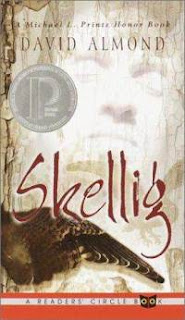 On the advice of Nick Hornby I finally read this young adult novel that I've heard about for years.

Michael and his family have just moved into a new house, and one day as he is poking about in the garage (against his father's orders) Michael finds a strange and seemingly ill man sitting in the corner. He has strange protrusions coming out of his back, and he eats bugs but really loves Chinese food and brown ale. Despite the man's insistence on being left alone, Michael befriends him and confides to him that his new baby sister is gravely ill and may not survive. Michael knows the old garage will be torn down soon and is frantic to get his new friend to safety without revealing his presence to his parents. When he meets Mina, the unusual girl next door, he lets her in on the secret and together they try to help the mysterious man.

Skellig was 182 pages and I read it in one sitting. I don't remember the last time I read a book in one sitting. This was a super quick read - so you have no excuse not to read it - but it's an amazing, beautiful, touching story. The writing is very straightforward and I like that it doesn't attach all sorts of meaning to the character of Skellig. It doesn't say "he's an angel" and launch into various mythologies - it just says "here's this guy and what he looks like and what Michael observed" without making it into something bigger. Clearly it IS something bigger, but it's never explained. Who or what Skellig is remains a mystery, and I like it that way.

The book deals with heavy issues, certainly. Michael's still unnamed baby sister hovers between life and death and Michael feels her heart beating in his chest next to his own. He desperately wants her to get better and focuses on it intensely, convinced that his concentration will make a difference.

Mina is a pretty wonderful character. Obsessed with birds, she is home-schooled and very staunchly believes in the superiority of self-directed learning over a formal school system. Curious and creative, she opens up new ideas and perspectives to Michael, while becoming a close and loyal friend.

Beautiful in its simplicity, this is a story that people of all ages can appreciate.