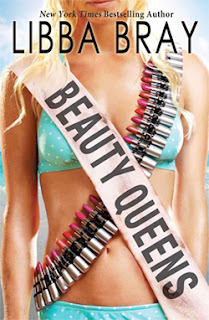 A plane full of contestants for the Miss Teen Dream Pageant crashes on a tropical island and the girls must fend for themselves as they await rescue. But it gets better. As the girls struggle to survive, their pageant training begins to give way and they start to reveal aspects of their personality they have spent years suppressing in the interests of appearance. It also starts to look like they might not be the only people on the island. The chapters alternate between different characters, interspersed with commercial breaks, footnotes, and amusing pageant forms containing trivia about each of the girls.

The pageant is sponsored by a company called The Corporation, which also produces a wide array of products, most notably Lady 'Stache Off (which becomes very important to the storyline.) We meet Ladybird Hope, pageant organizer, former Miss Teen Dream, and presidential hopeful. She is essentially Sarah Palin, right down to her folksy accent and poorly-formed meandering sentences. She is also in cahoots with one of the most colorful characters in the books, MoMo B. ChaCha. MoMo is dictator of the Republic of ChaCha, and an Elvis impersonator whose only trusted advisor is a taxidermied lemur named General Good Times. And I haven't even gotten to the reality tv pirates, but I'm going to have to stop because there's just far too much good stuff to fit in a short summary like this.

As you can probably tell, this isn't a serious book. (Which surprised me because the only other Bray I've read was the "Great and Terrible Beauty" series, which I loved but was VERY different.) Beauty Queens is completely satirical and unapologetically feminist. The pageant contestants were all interesting people with a variety of skills who had been molded by the pageant system to all essentially be carbon copies of each other. The desperate situation in which they found themselves forced them all to accept the realities of their own identities and each other's. And it was all completely hilarious!

The audio version is read by the author herself, and she is brilliant! It was all the funnier because of the way she read it, and her ability to speak in a wide variety of accents was impressive. I recommend the audio if you can get it, but whatever the format, if you like young adult literature at all you should absolutely read this book
Posted by 3goodrats at 10:00 AM