Health Care Reform: what it is, why it's necessary, how it works by Jonathan Gruber (2011) 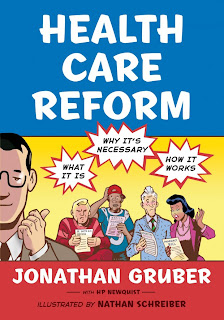 I know, it sounds like a crashing bore doesn't it? But this will change your mind: it's a comic! I knew the only way I'd read a book about the health care system was in this format. Jonathan Gruber is a professor of economics at MIT and a key architect of the Massachusetts health reform. In addition, he consulted extensively on the Obama plan, which is what this book is primarily about. He starts by explaining what is wrong with our system (which is hardly necessary) and goes on to explore various aspects of the Affordable Care Act (ACA) and the predicted outcomes and benefits.

When I first heard of this book I didn't realize it was written from this perspective or that it was about the ACA in particular. Rather I thought it was a more general and objective overview of the problems in our system and ideas for alternatives. Obviously Gruber is a champion of the new health care plan, so I took it all with a grain of salt. I should also mention that I haven't been a proponent of the plan myself, not because it's socialized medicine, but because it's not. In my opinion ANY system of health care based on private insurance companies is inherently flawed and will not work in the interests of our health.

In this short graphic work Gruber was only able to touch on all the aspects of this vast piece of legislation rather than exploring them thoroughly, so I am left with questions. For instance, he mentions that there is an exemption from the mandate for people who cannot afford insurance, but I thought one of the aims of the plan is to ensure that everyone can afford it. So that is a little confusing.

I'm also a little confused by the definitions of "affordable" in the plan - "up to 8% of income" can be a hell of a burden if you have a small income. People are being forced to spend a big chunk of income on what is essentially peace of mind, rather than more immediate concerns like rent, car repairs, or heating oil. But that is a criticism of the plan, not the book.

Reading this was quite educational for me, as I've only vaguely understood the most general aspects of the plan until now. It's undoubtedly better than the so-called system we have now, and better than the Massachusetts plan (I live in MA, and am not a huge fan of the system, though it's true that more people here have health insurance than anywhere else. Huge fines help.)

I should probably also mention the graphic aspects of the book. I found it clear and easy to follow, with appealing illustrations and a nice touch of humor. This digestible format is exactly what I needed to get a good overview of something complicated and a bit dull. I feel a bit better about the whole plan having read this. Though Gruber discusses the intended outcome of various pieces, he acknowledges that it's not a certainty. However, if even part of this works the way it's intended to, it will be a vast improvement.

'Just as an FYI - many other developed countries around the world have healthcare delivery models that utilize private insurance companies: Germany, Japan, Belgium, & Switzerland -- all of which provide UNIVERSAL healthcare coverage to their citizens at HALF the cost per capita than we pay in this country. Not all systems employ single payer mechanisms.

Ah, so it can be done! That is good to know. I haven't read up a lot on alternative systems, so thanks for the info!