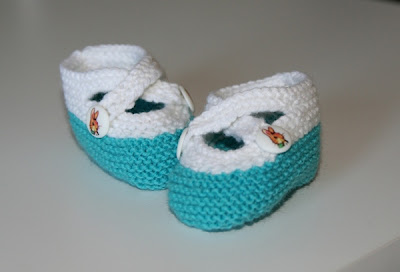 I made these for a baby shower I went to today. They were a pretty quick project that I just started at the beginning of the week. I don't usually wait until the last minute, but had trouble committing to a pattern. 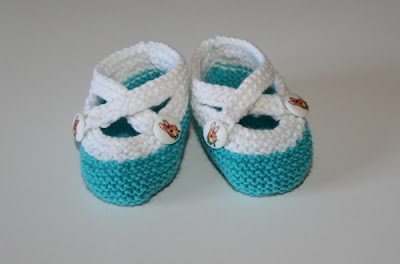 I used Saartje's Bootees, a free pattern I downloaded from Ravelry. The yarn is leftover from socks I made a few years ago, and I used size 2.5 needles.

Although they were quick and easy enough to make, I had a couple of minor quibbles with the pattern. To make the straps, you must cast on extra stitches in such a spot that you end up with several ends to weave in at the end of each strap. Weaving in adds bulk anyhow, but here there's so little fabric in which to weave that it's hard to find space to do all three ends without making it very stiff and bulky at the end of the straps.

Also, there weren't really instructions for the button loops. It just says something like "make a loop." I know from looking at other Ravelry projects that some people crocheted loops but I thought they'd end up too bulky. In the end I literally just made a loop with the yarn before weaving it back in at the end of the strap. I forgot to take pictures of the straps unbuttoned so you can see the loops, but they are literally just loops of yarn, so you can just use your imagination. I think it came out ok.

I have some extra buttons because I had a tough time deciding which ones to buy, so I may make another pair with yarn of a different color. Then maybe next time I know someone who's having a baby I'll have the booties all made and won't have to rush around at the last minute!*

(*This is much like when I vow to start knitting Christmas presents in September.)

I love this pattern - I knit this pattern once but didn't choose yarn with enough contrast. I like the colors your chose and I love the buttons!

The great thing is that it's so quick, you can just go ahead and make more! :)