One of my spontaneous projects I began recently are the Grown-up Booties from Whimsical Little Knits. I don't have any slippers right now so I picked up a skein of Rowan Purelife, which is this awesome undyed wool in sheepy colors, and started the pattern.

The construction is very clever, but apparently only works of your gauge - including row gauge - is spot on. Mine apparently was not. The first bootie came out boxy, almost completely square. Not cute. (By the way, the other projects on Ravelry are all adorable, so it's not an issue with the pattern.) It didn't occur to me to take a photo - sorry.

On the next one, I thought it might be clever to just sew up the toe differently. So instead of folding up that piece in the manner prescribed, I just sewed up the diagonal decreases edges, making it a pointy-toed elfin-style slipper. 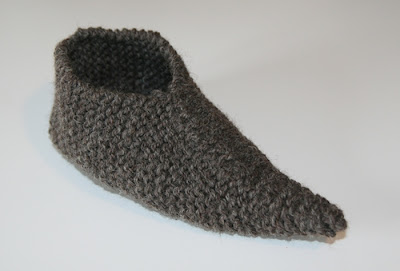 It looks kind of cute until I put it on and it becomes misshapen and odd.

On my third attempt, I thought "to hell with this clever toe idea" and joined the slipper in the round after the foot-hole part and continued in the matter of a traditional sock toe. This is much better. 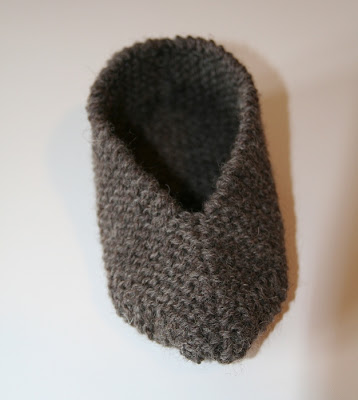 I should have joined it into the round sooner though, so that may need to be corrected.

Just to recap, I have now knit 3 booties and still don't have a pair and, in fact, may still need to knit at least 2 more before I have a matching set that I'm happy with. And by the way, the skein only makes 2 (and barely!) so this involves undoing my work to make more. The yarn is holding up very well through this process. 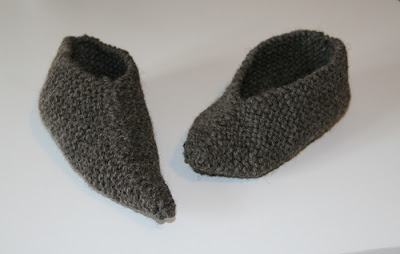 The experimentation is a bit cathartic, and I think will be worth it when I end up with something I actually wear. I guess this is what designers do - experiment - but much more and frequently on a larger scale. Perhaps I'll learn enough patience for experimentation with more complicated and time-consuming projects such as sweaters.
Posted by 3goodrats at 10:25 AM