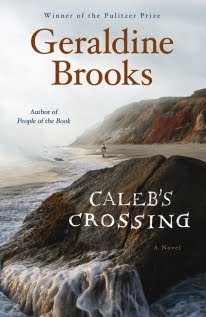 In 1665 the first Native American graduated from Harvard, and though little is known about his life, Geraldine Brooks has filled in that story in her latest work of historical fiction. Our narrator, Bethia, is a young woman living on Martha's Vineyard. Her father, a pastor, is trying to win over the heathen natives to Christianity. Though it is inappropriate in Puritan society, Bethia befriends a native boy, who she calls Caleb, and sees him in secret, learning about his people and their ways. This she blames for the many misfortunes that befall her family. She is tempted by their primitive religion, and even just spending time with this boy in secret is a sin, more so because he is a heathen. Her father begins to tutor Caleb and another native boy along with Bethia's brother, and eventually the three go to Cambridge to continue their schooling there. Caleb is brought ever more into the English world, creating a rift with his own people, but he never completely casts off his past.

This was a well-crafted story, so detailed in the ways of life for that place and time, and with a dramatic but believable story arc. Caleb was rather a mysterious character, more so because the story was told not from his point of view, but from Bethia's. Although she is close to Caleb for a time, she never really gets to know him as she'd like, and soon she is distracted by the responsibilities and tragedies in her own family and goes long periods without seeing him at all. But what is clear is that he is very bright and although he adopts English ways a part of him is still true to his roots.

The most noticeable aspects of life in this story were the position of various people, such as natives and women. Caleb was frequently treated as an outcast, and Bethia as one not deserving of education. But there were also many details I found fascinating. For instance, potable water wasn't as plentiful as today and the most common beverage was beer, even for children. They also ate very differently. It seemed that the large meal was at noon (which makes sense when you are doing manual labor all during the day) and then at night their dinner would be something like cornbread with butter, and beer. Hardly what we would consider a meal. I loved all those details about daily life!

Parts of this book just beg to be read out loud because the words are so beautifully strung together. I am reminded of Ann Patchett by the lushness of the writing and the strong imagery. Her descriptions were apt and recognizable, and sometimes unexpected. In a description of the library at Harvard, she says "The air in the room had a pleasant biscuit tang, like a hard-baked crust just drawn from the oven." There were so many passages I wanted to mark and quote because they are so expressive and beautiful, but I could fill pages with this and you're better off just reading the book.

I usually hesitate to read fiction based on real characters because I have such a tenuous grasp on history I'm afraid I'll further muddy the waters. Thankfully Brooks included an afterword discussing what of the story was actually true - very little it turns out, because there's almost nothing known about Caleb, and Bethia is entirely made up. I'm so glad I finally picked this up. It's the first book of hers I've read, but it won't be the last.