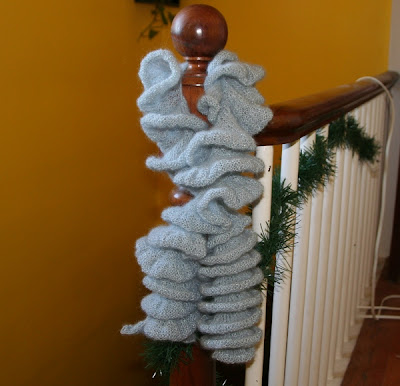 This type is scarf is knit lengthwise, doubling the number of stitches every few rows to create the ribbon effect (which you can't see until you cast off, making the entire process quite uncertain.) The pattern includes options for two different lengths and I went with the longer one.

Partway through I realized my gauge was off (no, I didn't swatch) so I knit a few extra rows to make up for the width. Turns out I probably would have been fine without the extra rows.

I had planned to wear it for New Year's Eve, but didn't finish in time. Instead I wore it the following week to the highly anticipated Russian Xmas XV: Rolling in the Beets (you're jealous, aren't you?) It's not long enough to tie, which I think is fine because that would make it too bulky. I used a brooch to hold the scarf together and it worked fairly well.

The yarn is rather sparkly, though you can't tell from the picture. It's also a bit pricy and I bought 3 skeins for the pattern's recommended yardage, but only used two. Though I considered trying to return the third skein, I think I may set it aside for tree ornaments and other embellishments.
Posted by 3goodrats at 10:30 AM