Dash and Lily's Book of Dares 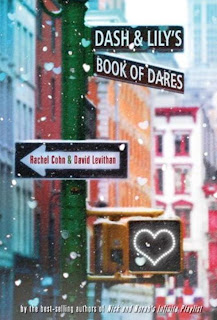 It's Christmastime, and Dash has told each parent that he's spending the holiday with the other. They haven't spoken to each other in years, so it's a pretty safe plan. Content to be alone, Dash goes to the Strand where, hidden on the shelves, he finds a red notebook with a message inviting the finder to follow some clues.

Lily is spending Christmas without her parents as well. They are vacationing in Fiji, leaving Lily at home with her older brother who is pretty much ignoring her in favor of his new boyfriend. In an attempt to keep Lily occupied, Langston decides to map out some clues in a notebook to potentially find Lily a romantic companion.

Passing the notebook back and forth without meeting, Dash and Lily send each other on fun and daring tasks all over New York City, building up to a (perhaps) inevitable meeting.

I like the premise of this book. It was fun to see Dash and Lily playing this elaborate game, while philosophizing about what they'd actually feel if they met in person. It's kind of like online dating. You never know how much of what you know about the other person is real, how much of it is what they want you to think, and how much is your own projection. That's very much what this novel was like. There was a lot of tension in this fun little adventure.

I feel like I've met these characters before, in many many YA books. They are super-smart, self-aware, delightfully quirky....these personalities have become fairly standard. I like them though, which I suppose is the point. I just couldn't get too super-excited about them.

It was a fun book and I flew through it. I just don't think it's a book I'll still be thinking about months from now. But for a cold winter weekend when you're at home looking for an engaging diversion, it might be just the thing.
Posted by 3goodrats at 2:13 PM