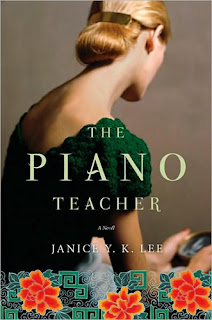 In anticipation of my upcoming trip to Hong Kong, I've been seeking out books that take place there. I recently read The Train to Lo Wu, and now I've just finished a very different book, The Piano Teacher. Will Truesdale, a newly arrived Englishman in Hong Kong begins a relationship with a notorious socialite named Trudy Liang just as World War II reaches their shores. During the Japanese occupation, Will is sent to an internment camp while Trudy remains outside and must forge alliances with the enemy in hopes of surviving. Ten years later, Claire Pendleton arrives in Hong Kong with her new husband Martin, and is hired by the Chen family as their daughter's piano teacher. She soon meets their chauffeur, the very same Will Truesdale, and begins an affair with him. Long-buried secrets begin to bubble to the surface and Claire finds herself in the midst of a crisis that has been brewing for the last ten years.

I'll admit I began this novel with a bit of trepidation. The description I read of it began with "In the tradition of The English Patient...." a novel which I failed more than once to make it through. While the Piano Teacher is also quiet and slow-paced, it is certainly not boring. Hong Kong is itself a character in the novel, the descriptions are so vivid. It was also fascinating to read about the occupation of HK by the Japanese, a dark period about which I knew almost nothing.

Life in the internment camps, as well as outside of them, was quite horrific. Loyalties were tested and life-changing betrayals occurred. The relationship between the English and the Chinese - and their commitment to remaining in HK and making it home - was a compelling part of the story as was the class structure. The Chens were very rich, both educated in the West, and quite influential. Trudy, the most enigmatic character, was part Chinese and part Portuguese, claiming not to be accepted by anyone, but confident enough to at least appear not to care. Though she, Will, and Claire were all deeply flawed, I found that I liked them all a great deal.

The most surprising part of this novel was my success with the audio version (downloaded to my phone!) I'm wondering if I'm getting better at listening to audiobooks, because this is a huge departure from my usual audio fare of young adult or chick lit. Or maybe it was just the quality of the recording. The narrator was very good, her British accent and soothing tones a pleasure to hear.

However you choose to experience it, I hope you like it as much as I did.
Posted by 3goodrats at 10:11 PM