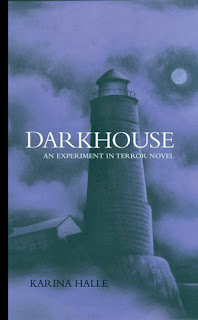 22-year-old Perry Palomino recently graduated with an advertising degree, and is disappointed to be working as a receptionist. She lives with her parents and younger sister, fashion blogger Ada, and generally feels like her life is without direction. One fateful weekend, she decides to explore the old lighthouse on her Uncle Al's property and meets Dex Foray under the creepiest of circumstances. When Perry posts a video of the evening's strange occurrences in the lighthouse, she's suddenly somewhat famous, and Dex asks her to join with him on a ghost hunting internet show. Perry isn't certain whether she should trust Dex, but at the same time she finds him extremely attractive, even though she knows he has a girlfriend.

The first thing that needs to be gotten out of the way here, is that this book is self-published and therefore hasn't gone through any professional editing process. This is apparent from very early on, and the writing is riddled with awkward phrasing, cliches and poor word choices. I was very surprised to see all the 5-star reviews on Goodreads, and when a reviewer on FYA says she didn't realize the book was self-published, my first thought was "Have you read a book before?"

However, in many cases her writing is spot on (and funny), and even though it can be very stilted, what she says is genuine and believable. On a larger level than word choice, it is clear she has talent. Although it reads sort of like a teenager's blog, her conversational style is a strength that makes the book a breeze to read. It's also just a great idea for a story and the plot is well-developed, as is Perry's character. Halle has found a good balance between action and inner monologue, sprinkling the story with just enough hints about Perry's and Dex's pasts to make the reader intrigued enough to continue on.

There are some great elements to this story - it is genuinely creepy, and even the awkward vocabulary didn't get in the way of that. The spooky lighthouse and its backstory is pretty fantastic. Perry is very likeable, and easy to identify with. She's struggling in her fledgling career in advertising, struggling with her body image, and just trying to figure out who she's going to be now that she's an adult.

Considering that Karina Halle did every bit of work herself including the cover art (which is fantastic), and wrote the whole thing in six weeks, it's pretty impressive. If she gets a traditional publisher to handle editing, marketing and other details, it will allow her to spend more time to hone her talent. I think we can expect to see much more of her in the future.
Posted by 3goodrats at 7:25 PM