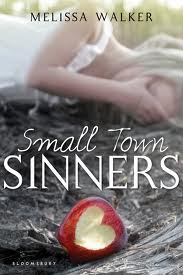 Lacey has finally gotten her license, and with it just a tiny taste of freedom from her strict parents. Everything will be different this year! Plus now she's eligible to try out for a major part in Hell House and she's hoping for the most coveted part of all - Abortion Girl. By acting out this sin for all the public to see, Lacey will help bring more people into the fold of her church, the church in which she has grown up and which has provided her with all the answers for her whole life.

Then Ty Davis comes to town, and everything begins to change. Lacey's conversations with Ty confuse her and challenge her beliefs. Then as Hell House becomes more surrounded in drama and scandal, Lacey starts to feel uncomfortable with how her parents react to everything, and how she would have reacted herself a few short months ago. For the first time, she finds herself lying to her parents and deliberately defying them as she begins to question everything she has been taught.

In the beginning, I couldn't believe how squeaky-clean everyone in this town was. It's like they were trying to out-goody-two-shoes each other. But it's a very small town in (I think) the Bible Belt, and the teenagers have been pretty coddled and sheltered their whole lives, especially Lacey. All it takes is one cute curly-haired outsider to make her really begin to think about her beliefs and question her faith.

At first I didn't think I'd like this book because I found found Lacey's narrow goody-ness a little annoying, but I very quickly began to enjoy the story. It's complex and so is Lacey. Even the super conservative people like her parents aren't all black and white, nor are they portrayed in a very negative way. It seemed like the author was really trying to understand the mindsets of Evangelical Christians without making them appear too narrow-minded or judgmental. Of course they kind of are, but the book does a good job of differentiating various levels of devoutness and showing how it can change.

Issues such as abortion and homosexuality and not only less black-and-white than Lacey imagined, but are also closer to home. For the first time she is forced to really think about the issues - and the people involved - rather than just spout the dogma she has internalized. And that is the crux of the story - learning to really examine your views and beliefs separately from what you have been taught. Lacey grows up a lot during the course of the novel, and we get to experience all the uncertainty and change along with her.
Posted by 3goodrats at 10:37 AM