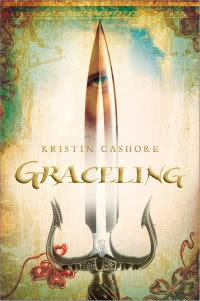 Katsa is one of a special type of people known as Gracelings. They are all recognizable for their two different colored eyes, and each has a special power known as a Grace. Katsa's Grace is killing, making her feared and ostracized. She has been forced to work as the king's thug, torturing and killing at his whim. Secretly, she has formed an organization called the Council, a group who works to combat injustice. When the novel opens, Katsa is rescuing the father of the Lienid king, who has been kidnapped for mysterious reasons. As she tries to get to the bottom of the kidnapping, she joins forces with the king's grandson, the mysterious and attractive Po. As Katsa and Po investigate the mystery together, they also make startling discoveries about each other, and themselves.

Katsa takes a little getting used to; she's very stand-offish, sometimes frustratingly so, and refuses to give in to her feelings. But it's easy to see why she has developed such a hard exterior. Forced into committing cruelties and feared by everyone she meets, she hasn't exactly had a fun life with fulfilling relationships. Her power-abusing uncle, the king, is her only family. The best part about Katsa is that she's so incredibly bad-ass, multi-skilled, and independent, truly a woman to admire!

Then Po comes along, and everything begins to change. He is so dreamy! But it takes Katsa a while to admit this, and she's suspicious because it's clear that he has a lot to hide, yet it's very difficult to hide anything from him. Their relationship is tentative at first, but soon heats up and becomes quite dramatic as they must make difficult choices in the interest of their shared quest.

It's taken me years to get around to reading this book, which has been recommended by so many people, and for good reason! An action-filled tale, the novel has a well-crafted storyline and is populated with a diverse cast of characters, both good and evil. Of course, you don't always know which are good and which are evil. I read most of the novel on my long flight to Hong Kong, and it was the perfect escape. Graceling is a great adventure in an unfamiliar land, with lots of surprises. It's also the first in a series so if you start now you can catch up by the time the third book, Bitterblue, is released in May.
Posted by 3goodrats at 7:45 AM