The Earth, My Butt, and Other Big Round Things

The Earth, My Butt, and Other Big Round Things by Carolyn Mackler (2003) 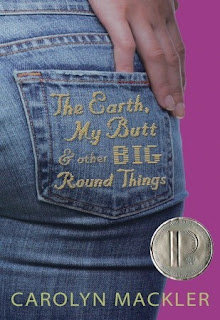 Virginia Shreves abides by the Fat Girl Code of Conduct. In a nutshell:
1. Any sexual activity is a secret.
2. Don't discuss your weight with him.
3. Go further than skinny girls.
4. Never, ever, ever, ever, ever push the relationship thing.

In between her Monday afternoon make-out sessions with Froggy Welsh the Fourth (his real name) she treats him as just another classmate. She desperately misses her best friend Shannon who moved away, and tries to avoid the snobby girls at school. Things are no better at home. Virginia is convinced she was switched at birth, since she looks nothing like the rest of her family. Her mother, an adolescent therapist, claims that she too once struggled with her weight and is all too happy to provide Virginia with a steady stream of advice on dieting and exercise, obviously uncomfortable with Virginia's appearance. Her father doesn't hide his admiration for very thin women, and these combined pressures from her parents do not help her self-confidence at all. More than anyone, Virginia adores her older brother, but when he is accused of a terrible crime against a girl at college, Virginia begins to question the healthiness of her relationship with him as well. (In fact, one of my favorite scenes in the book was when she finally told Byron what she thought about him. Yes!)

The first few chapters of this book were incredibly painful. Virginia harbors a great deal of self-hatred, and the list above really made me wince. I knew the entire book would be about her growth and self-confidence and learning to love herself so I kept going. It was so worth it. When Virginia began to question her family's judgment and the seemingly perfect lives of the other girls at school and started to take control of her own life and decisions, it was so empowering!

It became clear that her negative feelings towards herself originated with other people's opinions - or what she perceived them to be anyway - and when she realized that, it made all the difference. Virginia matured a great deal during the course of the book, and became self-confident and gutsy, standing up to her parents and no longer seeking approval from her brother. Her transformation was immensely satisfying. It doesn't look like Carolyn Mackler has written a follow-up, but if she ever does I'd be happy to spend more time with Virginia and see what she's up to, because I'm sure she has grown into an amazing and capable young woman.
Posted by 3goodrats at 4:29 PM

Labels: 2012 end of the world reading challenge, books, carolyn mackler, reviews, the earth my butt and other big round things, YA, young adult