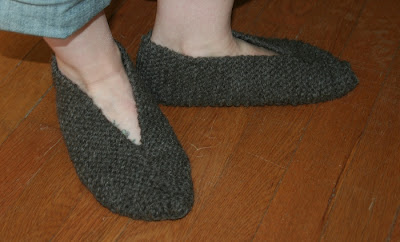 When I finally completed a successful toe on my Grown Up Booties, I assumed the second one would quickly follow. At least, this seems like the only plausible explanation as to why I didn't write down what I did. Now, about a month later when I went back to the project, I looked all over the place for my notes before ultimately having to admit that there just weren't any, so I winged the second slipper just as the first.

It seems a fair approximation. They don't match exactly, but I think they need to be blocked anyhow, maybe even lightly felted, so they can still be shaped into submission.
Posted by 3goodrats at 8:06 PM