I still haven't knit a stitch since before my vacation, but I did start something new just before I left which I haven't shown you yet. 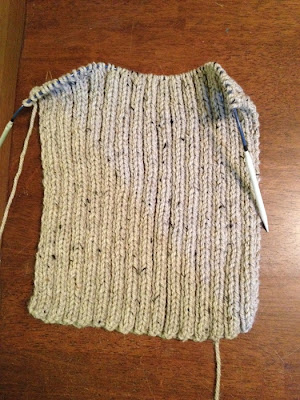 This is hopefully going to be the Mottled Rib Sweater from Rebecca. I say hopefully because somehow I bought completely inappropriate yarn so I'm knitting at a different gauge. I've added some extra stitches to make up for it, but I don't think I did any actual math. It is likely that I'll end up ripping out the whole thing and starting over.

The whole reason I was inspired to start this project was that I wanted to make a quick, simple sweater that I could knit up really fast and wear soon. I found the pattern for the Mottled Rib Sweater in an old issue of Rebecca that I had hanging around, and rushed out and bought some nice tweedy and cheap Plymouth Encore Chunky. Although I had extensive notes regarding suggested yarns I still managed to buy the wrong thing.

There are two very similar patterns in the magazine - the one I was aiming for and one in worsted weight. My gauge is between the two so hopefully I can cobble something together that ends up being a sweater that fits me and isn't embarrassing to wear in public. And hopefully I can wear it before spring, which means ramping up the progress. This week has been a total wash from the jet lag - I've gone to bed at 8 or 9 most evenings. (It's almost 9 now, so if this post doesn't make sense or even contain complete sentences, please forgive me.)

In summary, I wanted a quick and easy project. I planned poorly and am not following directions. Then I stopped knitting altogether for about three weeks (so far!) Nothing about this is turning out quick or easy, and yet I am still convinced that I'll have a fantastic new sweater in no time. Stay tuned for updates - they should be entertaining.