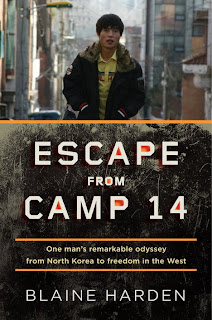 In 2005, a young man named Shin Dong-hyuk escaped from a political prison in North Korea, in which he had been born and lived his entire life. He is the only person ever to have escaped from such a camp. Washington Post journalist Blaine Harden spent a couple of years interviewing Shin about his experiences in order to write this book.

Shin has told a horrific story about the treatment of people inside the camps, where he was given only corn porridge and cabbage soup to eat and any infraction of the strict rules could result in being shot. The environment in which he was raised was so controlled Shin wasn't even exposed to government propaganda. He didn't even know about the existence of countries around him, televisions, or money.

After his amazing escape, he traveled aimlessly around China for months before finally starting to pull his life together. His biggest challenge in the outside world has been simply adapting to life among people who aren't prisoners, who aren't trained to snitch on each other, who aren't competitors for food.

In addition to Shin's personal story, Harden has included a lot of general information about North Korea which, for the most part, I found pretty helpful. There was gradually more of this contextual information later in the book, which broke up Shin's story a bit too much for me, but it didn't affect how eye-opening I found the book.

As much as I struggle with non-fiction, I think I read this book in about 2 days. It's short - under 200 pages - but also incredibly compelling. I want everyone to read this book and talk about it. I really had no idea this was going on and now I'm very curious about North Korea and about why the rest of the world isn't intervening in these horrible abuses. Escape From Camp 14 is accessible enough for teenagers or those who struggle with dense non-fiction and I think it would be a great choice for a Community Read. I let a lot of interesting-sounding non-fiction pass by, but I'm so glad I gave this book a chance. So should you!
Posted by 3goodrats at 7:04 PM