A Land More Kind Than Home 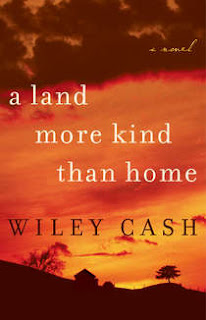 In a small North Carolina town, a church has slowly grown under the leadership of a pastor from out of town who sees himself as something of a prophet. He uses snakes and poison in his services, so convinced is he of his religion's power to overcome danger. But when a young boy dies during a service, the rest of the town is no longer content to look the other way.

The story is told from the point of view of three narrators: young Jess Hall, Sunday school teacher Adelaide Lyle, and Sheriff Clem Barefield. Their distinct voices are folksy yet genuine, and each told a different part of the story to create an intense, powerful whole.

My main impression upon finishing the book is to feel terrible for poor little Jess. Not only did he lose his brother with whom he was very close, but he wasn't allowed to go to the funeral or stay with his parents afterward. They sent him off to stay with his grandpa who he had never met, and who was of dubious character. His mother seemed fairly nice early on, though gullible for being involved in such a crazy church, but later on....oh, it became clear just what sort of person she was. Essentially, this is a story about a young boy with terrible parents.

But it's also about a small town dealing with evil in its midst, and I really appreciated how Cash developed the history of alliances and hostilities among the inhabitants, weaving in stories of the past with events of the present. Although Jess was closest to the current tragedy, Clem and Adelaide complemented his narration with their own, not unrelated, past tragedies.

I'm afraid one of the reasons this book was so satisfying to me is because of how much I dislike organized religion and I really enjoy when the super-religious go off the deep end and show just how wrong their ideas are. However, this isn't an anti-religion book at all, in fact I'd say that most of the characters are church-going folks. But it shows the deep divide between those who follow Jesus and those who think they ARE Jesus.

Not only do I think this would make a good choice for book groups, I think it could be an awesome movie, like a slightly friendlier Winter's Bone. Of course they will change the title to something stupid.

I picked up my Advanced Reader's Copy at the PLA Conference, but it hits shelves this week and I highly recommend seeking it out.
Posted by 3goodrats at 12:01 PM