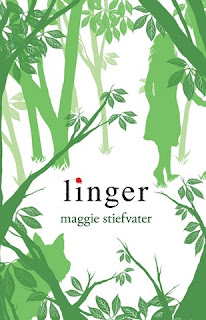 Now that Sam is cured of being a wolf, he and Grace are free to finally be together without worry. But when Grace's parents catch Sam sleeping over, it makes maintaining their relationship much more difficult. Also worrying is Grace's recent illness that becomes progressively worse throughout the book.

In Shiver, the narration alternated between Sam and Grace, but in Linger two more narrators have been added - Grace's friend Isabel Culpepper and Cole St. Claire, one of Beck's new recruits. For the audio this means the story is now being read by four different people, which was fine as their voices were distinct enough to tell them apart. I was also happy that there was a different person reading the part of Sam.

There wasn't much story progression in this book. Through most of it Grace had a bad fever and other suspicious symptoms so I knew something bad was happening but it took a long time to come. Their relationship woes were surprisingly annoying given how much I enjoyed the romantic aspect of Shiver. But now Sam has become a total emo boy, and Grace is just a whiny girl insisting she cannot be kept from her boyfriend because they are in luuuuuuuuuve. It was all a little much. Yet not enough.

Eventually though, the story progressed in a way that was slightly game-changing and interesting. Although this one was pretty slow I think that may be symptomatic of being the middle book of a trilogy. I plan to go ahead and listen to the final book as well in hopes that it will be better and give me a satisfactory ending to the story.
Posted by 3goodrats at 9:00 AM