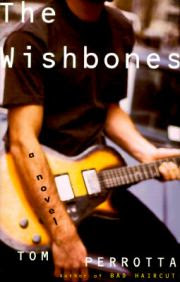 Tom Perrotta's first novel is about Dave Raymond, guitarist in a New Jersey wedding band. He's over 30 and still lives with his parents, and has been dating his girlfriend (who still lives with HER parents) on and off since high school. When Dave witnesses a member of another wedding band die, he's so upset he unthinkingly propose to Julie and now he's engaged, whether he likes it or not. (Mostly not.) Now that wedding plans are in full and enthusiastic swing, Dave meets a bridesmaid at a wedding and completely falls for her. He deals with it in the way you would expect from an immature, bumbling guy: not well at all.

I was partially sympathetic to Dave, but also wanted to slap him many times. He was a complete ass to those women. I don't feel like he had bad intentions though, I just think he was really stupid. Luckily, he was good-natured enough to make the book not only bearable, but a lot of fun.

I really loved the whole idea of the wedding band, and the band members and other characters were all colorful and quirky. One member of the band found out at the beginning of the book that his wife was leaving him and he began totally falling apart. Another, single for so long his bandmates weren't even sure which gender he preferred, had spent years working on a musical about the JFK assassination. The third was a happily married father, but also an alcoholic. Minor characters, such as a racist and paranoid talk-show host who ironically calls himself Genial Jim, inject additional notes of hilarity throughout the novel. (I know he doesn't sound funny at all, but it was a funny scene. Trust me.)

Because this was Perrotta's first novel I wasn't expecting a whole lot, but I'm really impressed. I enjoyed The Wishbones as much as any of his other books. Maybe it doesn't delve as deeply into complex issues as Little Children or The Leftovers, but this light, funny novel was just as well-executed and pleasurable.
Posted by 3goodrats at 9:35 PM