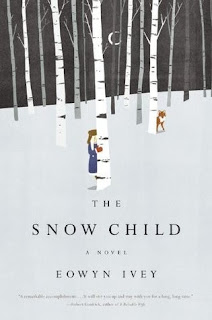 In 1920s Alaska, Jack and Mabel hope to forge a new life for themselves. After the heartbreak of a stillborn baby they have reached middle age childless. In Alaska, they want to start a farm, keep to themselves, and led a quiet life alone. But it is more difficult than they thought, and the distance growing between them only makes their troubles worse. One night in winter when they have almost given up hope, they build a child out of snow and dress it in woolens. In the morning it is gone, but later they see a girl running through the woods in the scarf and mittens from the snow child. Where did the girl come from? How can she possibly survive alone in this harsh climate? Jack and Mabel each have their own ideas as they tentatively reach out to this mysterious girl.

Though the couple went to Alaska to be alone, they reluctantly become friends of their nearest neighbors, a raucous and friendly family who are lively and generous. They need the companions, because it is clear that just having each other isn't enough. When Mabel is upset, Jack will just turn away rather than comfort her. It's not that he doesn't care, just that he doesn't know how to support her. She needs a friend who understands and finds it in the unusual Esther. Jack, too, needs help as he struggles to build a farm from scratch by himself, and the neighbors' son Garrett becomes invaluable.

Based on reviews that described the book as a retelling of the Russian tale of Snegurochka, I didn't think I'd like it. I expected the writing to be dreamy and ethereal, fairy-tale like. But when I picked up a copy from the library shelf and read the first page I was instantly smitten. It couldn't be more grounded. It begins with Mabel alone, the silence broken by the scrape of the broom across the wooden floor, the rasp of her boots on the ice. Everything is so tangible I can almost feel the cold Alaska air myself. This is some of the nicest writing I've had the pleasure to read. Several times I came across a sentence which I read over and over just to enjoy the sounds of it.

The story was well crafted too. There isn't a need to suspend your disbelief here, because there is nothing obviously magical or paranormal that happens. When there are surprising events, the characters are surprised as well and explain it in some reasonable way. I like that fine line between our world and another; something slightly odd may have happened, but surely it's not what we think.

For someone who hates the cold, I've always been strangely drawn to books set in harsh freezing climates. But even if that weren't the case, there is still a great deal to enjoy about The Snow Child.
Posted by 3goodrats at 8:58 AM