I've reached the smocking portion of my Coraline cardigan.

To create a smocking pattern, basically you slip two stitches that are several stitches away from each other, wrap the yarn around those two stitches, then knit all the stitches in their original order. It's tricky to get the wraps to all be the same length. You can clearly see that I've failed at this. However, if you are close enough to notice this while I'm wearing it, you are too close for my comfort. 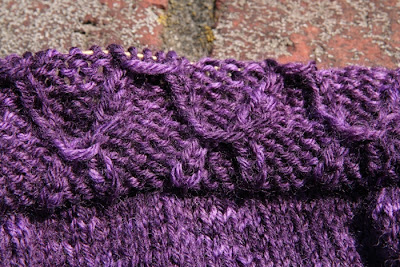 The weird ridge where the smocking area meets the rest of the body is (hopefully) because I put in a life line. I wasn't feeling confident about my smocking skills. I may take it out, but then again I'm concerned about my row gauge being a little off so maybe I'll still have to rip back. I'm very unsure of everything at this point, but the good news is that the weather won't be appropriate for this sweater for several months now, so there's no hurry.

Here's a rather messy view of Coraline in its entirety. Almost there! And almost out of yarn! 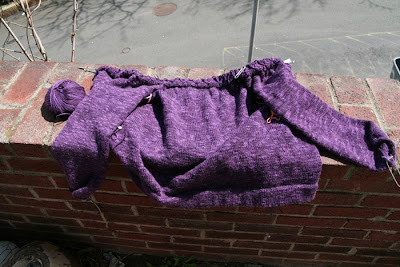