For the past week or so I have been a sock knitting factory.

Not only did I finish my first orange sock, but I started the second one and even made it past the heel turn. 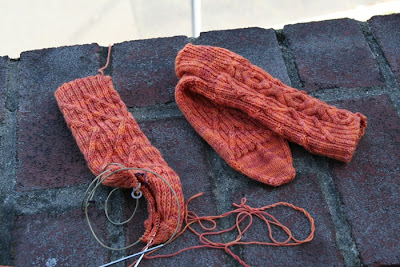 That is a lot in itself, but I ALSO have knit about half of a black sock just on my bus commute. 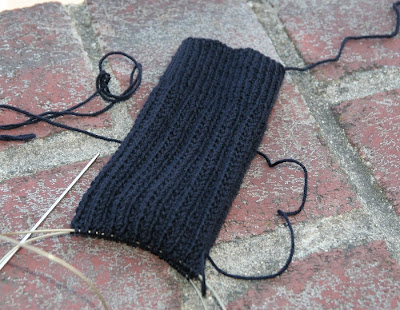 That equals an entire sock in a week, a feat I have not achieved since back in aught-eight when I spent a week at my mother's house in Maine while she was having radiation treatments. That equaled a lot of boring rural Maine time combined with a lot of waiting room time. I have somehow managed to replicate that productivity through a careful combination of bus commuting and old episodes of the X-Files.

The black sock is the Twin Rib pattern from my favorite sock book, Sensational Knitted Socks. I wanted something simple I could do on the bus while listening to audiobooks. I can knit close to two inches a day on my regular commute. At this rate, I should be able to make an entire drawerful of socks in no time.
Posted by 3goodrats at 9:00 AM