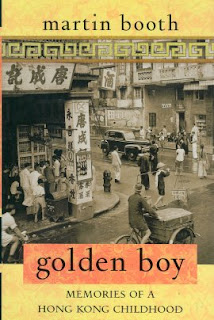 In 1952, when Martin Booth was 7 years old, his family moved from Britain to Hong Kong where his father was to be posted for 3 years. Martin quickly took to Hong Kong and its people, learning basic Cantonese and eating whatever was offered to him, no matter how off-putting. His willingness to immerse himself in Chinese culture earned him favor with the locals and gained him entry to places like Kowloon Walled City, a potentially dangerous area not generally open to outsiders. Some of his more colorful experiences recounted include visiting opium dens, eating beetles and preserved eggs, and digging up the bones of a Japanese soldier. His home life was also far from boring, his angry, gin-swilling father accusing Martin of "going native" (apparently a bad thing), his mother fun and pleasant, and just as taken with local culture as Martin.

Booth's descriptions of his experiences - the sights, smells, and tastes of Hong Kong - are the heart of his book. Anyone who enjoys books that provide a strong and detailed sense of place will appreciate Golden Boy. The other main appealing part of the book is Martin's relationship with his mother. She loved Hong Kong and, like Martin, didn't ever want to leave. She was always up for adventure and included Martin in as many of her activities as possible, and seemed to really enjoy hanging out with him. Her husband certainly didn't appreciate the local flavor, so Martin was always her companion of choice. I found their relationship very sweet.

I'm trying to decide if I would have liked this book as much had I not recently traveled to Hong Kong myself. It's clear that Hong Kong was very different in the 50s than earlier this year when I visited, so though many of the place names were familiar, that is where a lot of the similarities ended. (Though some of the food from the book is recognizable, as is the practice of locals hanging their laundry outside their windows.) Less a story than a slice of life, I think there is a lot in Booth's book that would appeal to anyone interested in travel and other cultures.

Martin Booth left Hong Kong with hopes to return, and his family did return later for several years but unfortunately we won't hear any more about it as he died shortly after finishing the manuscript for this memoir.

Have you read any good books with detailed descriptions of living in a particular place? Leave your recommendations in the comments!
Posted by 3goodrats at 9:00 AM