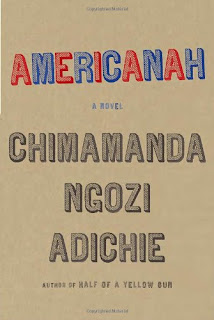 In this new novel by the author of Half of a Yellow Sun, a woman named Ifemelu is preparing to return to Nigeria after more than a decade in the U.S. She had left behind her first love, Obinze, and she contacts him to let him know she will be returning. Obinze also left Nigeria at one point, for England, and now he is back in his native country, married and with a child. But he has never forgotten Ifemelu, nor she him. In the U.S. Ifemelu has had her own relationships, including the one she is ending to move back to Nigeria. She has become well-known through her blog Raceteenth or Various Observations About American Blacks (Those Formerly Known as Negroes) by a Non-American Black. The story moves back and forth between present day and the time before Ifemelu left, and from continent to continent.

As the novel begins, Ifemelu is driving from Princeton to Trenton, NJ to have her hair done at the only place around that does African hair braiding. Hair is an oft-visited political theme in the story and effectively illustrates many of Ifemelu's identity struggles. One point she returns to again and again is the difference between Africans and African-Americans. She says, "When you make the choice to come to America, you become black." Until that point she was only Nigerian, but in America she is suddenly classified as black and grouped with people whose experiences are very different from hers. She didn't know the stereotypes or the political nuances of race in the United States and found times when she was "supposed to" be offended but wasn't. It's really fascinating.

Adichie's observations about American life were spot-on without being too critical. Ifemelu had a fascinating conversation with her friend Ginika soon after arriving about the nuances of referring to someone as "thin" versus "slim" and "half-caste" versus "biracial" and how the connotations are different here in the U.S. than how they are perceived in Nigeria. Other characters discuss how everything in America requires a diagnosis, one character remarking: "Everybody is conflicted, identity this, identity that. Somebody will commit murder and say it is because his mother did not hug him when he was three years old."

Later when Ifemelu returns to Africa, she is unable to just pick up where she left off. America has changed her. She has different tastes and has become used to a different lifestyle, making integration in her homeland tougher than she anticipated. She befriends a coworker who has also recently returned from the U.S. and they bond over their shared experiences, even going so far as to make fun of how Nigerians talk.

There was much to love even aside from the observations about race and immigration. I loved Ifemelu and Obinze and the other characters, and thought that Adichie did a wonderful job of fleshing them out and making them seem real. Additionally, she added many details that made the story seem so very present (as with Half of a Yellow Sun). There's a scene near the end that takes place in Nigeria, in which Ifemelu and Obinze stop at a roadside hawker to buy plantains and something about that scene was incredibly transportive. Have you ever been to another country and noticed how even the smells and sounds and lights are somehow different and strange but exciting? That's kind of what that scene was like. Adichie writes many scenes that feel vivid and immediate like that.

Some reviews found Americanah a bit too polished, and I guess I can see what they mean, but I still enjoyed it immensely. No, it's not like Half of a Yellow Sun, but it can't be - this isn't a war-torn setting, there's no death or destruction. Yellow Sun was pretty raw and dramatic, but it was about war and Americanah is simply a different sort of book. Coming in at close to 500 pages, I think it could have been a bit shorter but I didn't struggle to get through it at all. I couldn't put it down, and read it in just a few days. There's a lot to discuss about it, and many passages I thought were especially clever. What a great choice it would be for a book group.
Posted by 3goodrats at 12:47 PM

Great review! I loved her first book, I'll definitely check this out.

I think the great reviews it's getting are all well-deserved!