Home is a Roof Over a Pig

Home is a Roof Over a Pig: An American Family's Journey in China by Aminta Arrington (2012) 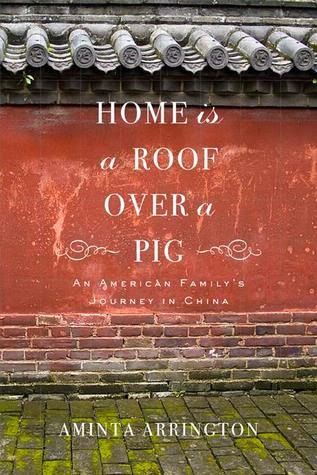 This is just what the title says - the story of an American family who move to China. Aminta Arrington and her husband both got jobs teaching English and moved to the small city of Tai'an with their three very young children. This wasn't their first visit to China; in fact, they had gone just a year or two before to adopt their Chinese-born daughter Grace. Immersing three children in a Chinese school and raising a Chinese-American daughter in China added even more interest to what is already a pretty fascinating premise.

Memoirs can be such a crap shoot - as I've mentioned before I tend not to read them because so often a great story is poorly executed or a maybe it's a well-written memoir but not terribly interesting. I'm happy to say that in this case the author writes quite well about a fascinating topic. It's not strictly chronological. Each chapter is titled according to theme: "Home," "Winter," and "Independence," for instance. Stories about the family's adventures illustrate the topic of that chapter, which are all woven quite seamlessly together.

The title of each chapter is written in both English and Chinese as Arrington discusses the language and the symbols for each word quite extensively. The title of the book, for instance, refers to the Chinese character for "home" which is the "roof" character placed over the character for "pig." She puzzles out many of the characters by looking at each part and it's meaning and gleaning cultural clues from the written language. Learning Chinese was a struggle for everyone in the family and since Aminta and her husband both taught English, she has a unique perspective and has put a lot of thought into the relationship between language and culture. Conversations with her students on subjects such as population and the one-child policy, Taiwan, freedom and independence, and the education system in China not only illustrate the difference between our cultures, but provide insight into how culture shapes each person's worldview.

My knowledge of China and its language primarily stem from my visit to Hong Kong in 2012 and my experience buying Chinese materials for the library. That was enough to pique my interest and the reason I first added Home is a Roof Over a Pig to my to read pile, where it has languished since I first read a pre-pub review of it. Thanks to the TBR Pile Challenge I finally picked it up and I'm so very glad. There is something fascinating about someone moving to a new country and being immersed in a different language and culture and this book did a great job of capturing that experience. I enjoyed every bit of it, and now have a powerful hankering for some (authentic!) Chinese food.
Posted by 3goodrats at 7:50 AM

This sounds like a book I would definitely like--thanks for reviewing it. If you want good Chinese food go to Sichuan Gourmet on Beacon St!

Is that the one you recently mentioned on Facebook? If so, I have already noted it somewhere and want to go soon!

Sounds like an interesting book. And I love that the sign for home is just a roof placed over a pig :-)

Yes! And there were many interesting little factoids like that.