The Best of All Possible Worlds

The Best of All Possible Worlds by Karen Lord (2013) 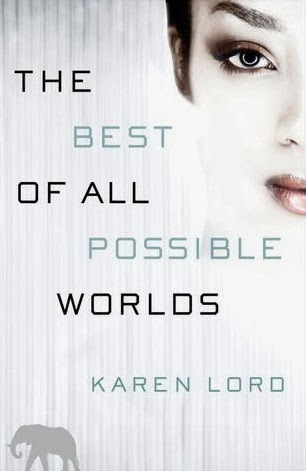 The Sadiri are suddenly a people without a planet, much of their population destroyed in an attack. Now they are on Cygnus Beta, embarking on a journey around the planet to visit groups they may share genetic similarities with in the hopes of finding potential mates for the large number of male survivors, thus ensuring the future of their race. Grace Delarua, a government liaison with a talent for languages, accompanies them on their journey around her planet as they visit various cultural groups to learn more about them.

I read so many great reviews of this book, and desperately wanted to like it as I desperately want to like all science fiction that ends up disappointing me (see: The Windup Girl, for example). I loved the idea of this story, and although I mostly enjoyed reading it, it felt rather cold and distant. The narrator could have been any of dozens of characters I've read before. Though her conversational style seemed promising early on, she was simply not very well developed, nor were the other characters.

Specific aspects of the story that I found kind of fascinating went unexplored. One character, Lian, is described as being "gender neutral" which "may or may not mean that Lian is asexual, though many of those who are registered as gender-neutral are indeed so." The significance of this declaration is never explained, though it seems to negate the possibility of a romantic relationship. Why? And how many people declare themselves gender neutral? Late in the story, Grace's mother confesses to a possible relationship with a married woman, and Grace asks "Are you sure she's interested in you or is it both of them?" Are three-person relationships a thing on Cygnus Beta? I will never know because none of this was explained. Perhaps this just isn't supposed to be what the book is about, but there is a romance taking shape throughout the novel and the journey is very much about finding mates for people, so I think my criticisms here are relevant. I want to know more about the gender/relationship landscape of this planet.

As for that romance, it felt flat for me. Although it was easy to see Grace and Dllenahkh's friendship solidify through the story, there was no romantic/sexual tension whatsoever. I don't even know if she was attracted to him; in fact, his appearance and her initial reaction to meeting him was never described, so early on I wouldn't have known if he was even a potential love interest. Few of the characters were described physically and it was tough to picture them. I only know they were "shades of brown" and some of them had hair that shimmered. (As an aside, that white woman has no place being on this book cover.) Dllenahkh was fairly Vulcan-like in his interactions and Grace rather standoffish herself, so that was not exactly a recipe for a hot romance.

Despite how all of this sounds, I still liked the book, just not as much as I wanted to or could have. Many great elements were present: different cultures, psionic abilities, a fairly conversational narration (some reviewers disliked that the narrator occasionally addressed the reader directly, but I didn't mind). This was not a struggle to read - I flew through it pretty quickly and liked it well enough while I was reading it. It just left me unfulfilled.

I am frustrated by my apparent inability to enjoy science fiction. I want to read books about space travel and alien races and technologies that don't exist (yet) and the descriptions of some of these books sound fantastic. But when I sit down and try to read them I struggle. I want them all to be The Sparrow or Losers in Space but mostly they are just so damn clinical and totally void of personality and emotion. It makes it hard to care what happens. Am I just reading the wrong stuff? Or is this just how the bulk of science fiction is written? Please enlighten me, or tell me what I should be reading instead.
Posted by 3goodrats at 7:16 PM

I just read this book and while I liked it a little more than you did, I agree with your points. She didn't flesh out the settlements they encountered enough, either. You liked the Sparrow, so it's not hopeless (you and sci fi!) ! I think you should read Lois Mc Masters Bujold, the Miles Vorkosigan saga. I've got a bookshelf list on goodreads of sci fi I liked.

There is definitely SciFi I like, which I think is why I keep trying. I'll keep the Bujold in mind - thanks!