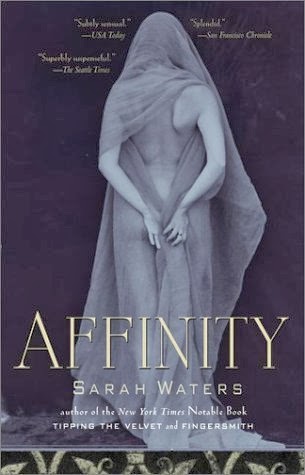 Margaret Prior has just begun charity work at Millbank prison as a "Lady Visitor." London's prisons in 1874 are pretty grim, and it is Margaret's job to spend time talking with the inmates in hopes of encouraging them towards being productive members of society upon their release. Margaret herself is recovering from a dark time in her own life and is therefore quite vulnerable to the charms of one of the inmates with whom she visits. Selina Dawes is a spiritualist, imprisoned for fraud and assault, and Margaret becomes quite attached to her, willing to take greater and greater risks in order to spend ever more time with her.

I love literature set in the Victorian period, and spiritualism was quite popular at the time. Like other spiritualists, Selina would hold seances, or "dark circles," and communicate with the deceased loved ones of her attendees. Margaret was quite drawn to Selina's stories and even began visiting a local spiritual society to learn more. As I tend to do with any book involving the supernatural, I wasted a bit too much mental energy trying to figure out whether or not I was supposed to buy into Selina's claims. It should have been enough to know that Margaret bought into it, as she is the first-person narrator of the story, but I'm too much of a skeptic for my own good. When all was said and done I liked the novel more after finishing it than I did while reading it.

Still, to me it wasn't as good as the other novels I read by Sarah Waters. This was her second book, and I don't think it quite lived up to her first one (Tipping the Velvet) or those that came later (Fingersmith and The Little Stranger.) It's hard to put my finger on why, but I don't think it's just the spiritualism theme. Somehow it's not as rich or descriptive and I didn't become caught up in it the way I was with her other books. This is not to say that I didn't like it, not at all. I think Sarah Waters is incredibly talented and her books that I've loved surpass most other books out there.

Even this one I quite enjoyed reading, especially everything about the prison conditions and the story that emerges about Margaret's past and her relationship with her sister-in-law. Waters sharply illustrates some of the ways women were confined at the time, both in prison and in general society. I'm looking forward to finally catching up completely with her work by reading The Night Watch, and am also quite excited to learn that her next novel, The Paying Guests, will be released in the fall. For those of you who have read Sarah Waters, how do you think Affinity compares to her other books? And what about The Night Watch?
Posted by 3goodrats at 1:26 PM