The Book of Blood and Shadow

The Book of Blood and Shadow by Robin Wasserman (2012) 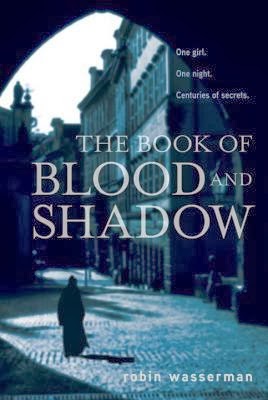 To escape the halls of Chapman Prep, Nora Kane takes a job as research assistant at the nearby university along with her best friend Chris and his college roommate Max. The job: translating letters that the professor (known as The Hoff) believes will help unlock the secrets of the mysterious Voynich manuscript. Just as their work begins to yield clues, Chris is murdered and Max goes missing. The only witness is Chris's girlfriend Adriane, who is in such shock she cannot remember anything from that night. Reeling from the tragedy, Nora and Adriane are determined to find out who killed Chris and embark on a dangerous journey to Prague. Not knowing what to believe or who to trust, the two young women investigate secret societies, dark conspiracies, and rumors of a machine that will talk to God.

In summary, this novel is sort of like The Da Vinci Code, but well-written and starring teenagers. But in this case, the fun, fast-paced story of mystery and intrigue contains a layered plot and complex characters.

Nora is not your typical high school student. She separates her life into two eras: Before Dead Brother and After Dead Brother. BDB she was a pretty typical kid in a pretty typical family. Then her brother got drunk, stole a car, and ran into a tree killing himself and his passenger. Her family destroyed, Nora lost herself in the one thing she always excelled at: Latin. It was her proficiency in the language that led her to Chapman Prep and then to the research assistant job. Her role was translating letters from Elizabeth Weston, the stepdaughter of a man named Edward Kelley who was associated with the manuscript. The Hoff was pretty convinced that Elizabeth's letters were insignificant (she was just a teenage girl, after all) but Nora became convinced otherwise, and became consumed by the letters and felt a strong connection with Elizabeth Weston.

The other characters were also well-developed and intriguing. Nora has an unlikely partner in Adriane, who is far less serious but can surprisingly rise to the occasion when needed. Adriane is a recognizable teenager, unpredictable and somewhat of an enigma. She can be hard to figure out because she hasn't figured herself out yet. Nora's boyfriend Max is the primary suspect in Chris's murder, and Nora is convinced of his innocence from the start. But clearly he is somehow involved, and the twists and turns of the plot keeps Nora and Adriane guessing. When Chris's cousin Eli appears to help them solve the mystery, he also is a wild card in terms of his loyalties. The characters were all played off each other quite expertly, only deepening the mysteries of the story.

More sophisticated and descriptive than a lot of writing for young adults, Wasserman's style adds to the atmosphere that is so important to the novel. Here's a passage describing a cemetery:

"Here the worn, chipped, dented, tired graves were crammed together, sagging at alarming angles, their inscriptions mostly worn away. A few clusters of three, even four stones leaned on one another, as if the ground beneath them had mercifully shifted to allow for the comfort of contact."

At the same time, it's not all so serious as to be unbelievable. Nora and Adriane are sarcastic and funny at times, and even when I wasn't sure how much I liked them (especially Adriane) I did like spending time with them on their adventure.

The plot revolves around the Voynich manuscript, which is a real book of unclear origin written in a language nobody has been able to decipher, accompanied by strange illustrations. Many theories abound about its authenticity and meaning and after finishing the novel I immediately began to read all about it. The book has been scanned and you can view it here. It's worth taking a look for the illustrations alone. I liked that the story weaves in a real-world mystery, and reading this you accidentally learn about steganography, and the difference between a code and cipher. Educational!

I hadn't even heard of The Book of Blood and Shadow until I received it as a gift and I'm surprised it isn't more well-known. There are few young adult mystery/thriller novels that aren't paranormal and that alone would make it unique. But elevating it even more is the sophisticated plot and characters, with writing that really helps immerse the reader in the world. It was great fun to read!
Posted by 3goodrats at 9:42 AM