The Other Typist by Suzanne Rindell (2013) 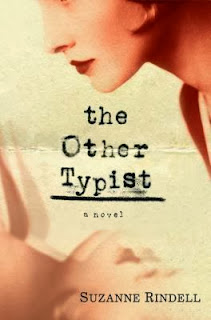 Rose was an orphan, raised in a convent, and now works as a typist at a police precinct in New York City at the height of Prohibition. When a new typist named Odalie begins working there, Rose is strangely drawn to her and soon they are friends as well as roommates. The formerly-wholesome Rose now lives a lavish lifestyle, dressing fashionably and going to speakeasies every night. Her new relaxed attitude begins to affect her work in a way that will have serious repercussions.

Rose's first-person narration hints at a much darker future, from where she tells her story chronologically as recommended by her doctor. She remarks frequently but somewhat cryptically on the unfortunate end to her story, noting how dishonest Odalie was with her, and that she didn't know about Odalie's machinations at the time. I liked Rose's voice, and though she could be naive, at times her sharp wit came through. When describing one of the men at the precinct she says "He is very likely wondering if I'll faint and crumple face-first over the stenotype...But we live in a modern age now, one in which women have enough to do without having to trouble themselves with the obligation of fainting all the time..."

But Rose also plants seeds of doubt about her character and reliability as a narrator. Early on, she reveals that she was accused of an "unhealthy" relationship with a girl she knew at the convent. She is quite defensive about this, which casts doubt on her story - along with the strange journal of Odalie's activities that she keeps - so I never knew how much I should trust her. On the other hand, I never trusted Odalie at all, as you are expected not to, and for a character who wasn't easy to like I rather enjoyed reading about her.

The most interesting part of this novel is the ending, which I can't discuss in any meaningful way without spoilers so I'll try to be vague. It's either totally ambiguous or a shocking twist, depending on how you read it, and the nature of the shocking twist varies considerably by reader. I didn't know what to make of it so spent a great deal of time reading reviews and discussion threads on Goodreads. Let's just say this is a great choice for a book group which is, in fact, the entire reason I'm reading it. I'm still not entirely sure how I feel about the ending, but I'll certainly give the author credit for writing a finish that keeps me thinking about it for days, maybe even longer.

I found many appealing elements to this novel. The speakeasies, bootlegging, and women daringly bobbing their hair lent it a distinctly 20s-era feel. From the moment I picked it up I was quite powerfully propelled through it.  When it was over, I really disliked it for a moment, but after I spent some time thinking about it, I decided that I still like it quite a bit. This complex array of feelings is probably enough to recommend it and, when all is said and done I would, especially to anyone who would like an unusual and character-driven story of the 1920s.
Posted by 3goodrats at 2:32 PM