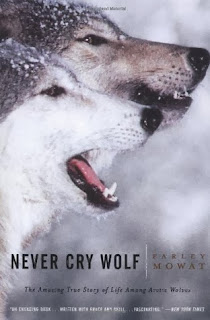 Farley Mowat was sent to the Canadian tundra to investigate why wolves were killing off the caribou, and his account of that summer has become a classic of nature writing. Dropped off by a small plane on a frozen-over lake, Mowat had to establish a base camp and find the wolves he was to study for the next several months. He also had to protect himself against the animals, which were considered dangerous and bloodthirsty. Surprisingly, after his intense observation of the wolves, that is not what he found.

Mowat's style is grandiose and humorous, like an older relative regaling you with exaggerated stories of his youth. He may anthropomorphize the wolves a bit, but honestly it made for a more personable story, and his conversational style was still informative. His distrust of conventional thinking and the government for which he worked shone through.

I'm always drawn to stories about people immersing themselves in another culture and Mowat's book fit firmly in this genre, though in this case the culture is non-human. In his attempt to understand the wolves he adopted their sleep patterns, marked his territory, and even ate mice. He was committed to the bit and it paid off in vast knowledge.

I've always liked reading about nature and animals. As a kid I read Call of the Wild and White Fang, and a whole parade of books about horses including my favorite, Misty of Chincoteague. As an adult, my nature reading has been primarily hiking books like A Walk in the Woods and Wild (though Thoreau's Walden has been on my list to read for a while now.) Although I found this one informative and rather amusing, it lacked depth and his writing style isn't my favorite. But even though I probably won't seek out more books by Farley Mowat, I'm glad I finally tried him.
Posted by 3goodrats at 10:57 AM