The Haunting of Hill House

The Haunting of Hill House by Shirley Jackson (1959) 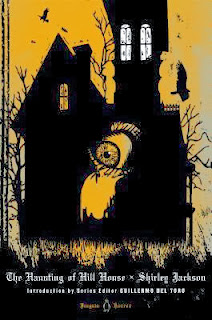 A strange house sits nestled in the hills outside of a town called Hillsdale. Rumors of its sinister history have caught the attention of a Dr. Montague who rents out the house in hopes of scientifically studying the phenomena. He carefully chooses guests to accompany him, including a relation of the family who own the house. At first it seems like a lark, and the guests all spend time frolicking around and getting to know each other, but soon they begin having experiences they cannot explain away, and their stay turns from fun to terrifying.

Considered a classic in haunted house literature, Jackson's novel contains all the best elements of success: an imposing structure with a confusing layout, a history of mysterious deaths in the original family, unexplained occurrences, standoffish townspeople, and characters who might not be quite healthy mentally.

It is this psychological element that is most powerful in any horror story, and here it was used to its best advantage. The central character is Eleanor, a 32-year-old woman who has spent the last 11 years taking care of her sick mother. Her character is introduced with this statement: "The only person in the world she genuinely hated, now that her mother was dead, was her sister." Then, in a restaurant when Eleanor observes a small girl refusing to drink out of a cup that's not the one she uses at home: "Don't do it, Eleanor told the little girl; insist on your cup of stars; once they have trapped you into being like everyone else you will never see your cup of stars again; don't do it; and the little girl glanced at her, and smiled a little subtle, dimpling, wholly comprehending smile, and shook her head stubbornly at the glass. Brave girl, Eleanor thought; wise, brave girl."

This scene was very telling. Eleanor is trapped in her narrow little life and jumps at the chance to escape it to visit Hill House. Unfortunately, her desperation makes her particularly vulnerable to the personalities and forces around her there. She quickly forms a friendship with Theodora, the other young woman who has been invited, but their relationship becomes troubled as the story progresses, partly due to the attractive young Luke who Eleanor seems fond of. Her growing insecurities and the increasingly unnerving events at the house converge upon her to her detriment. Her character was delightfully complex, simultaneously irritating and sympathetic.

Although I didn't love The Haunting of Hill House as much as We Have Always Lived in the Castle, I still found it an excellent creepy tale and will certainly try more of Shirley Jackson's books in the future.  I should also mention how much I like this particular edition, with the orange and black cover and pages edged in black. I couldn't get through Guillermo Del Toro's series introduction unfortunately, but thought the other introduction by Laura Miller to be quite interesting (but read it after reading the book because there are spoilers.) If you like creepy or psychological stories, definitely give this one a try!
Posted by 3goodrats at 10:39 AM

Shirley Jackson will always be one of my all-time favorites! Glad to see such a recent review!

Up All Night Horror Fiction Review