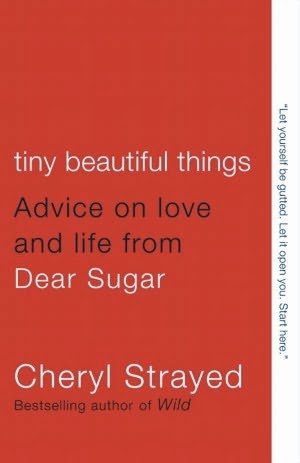 Before Cheryl Strayed became famous with her memoir Wild, she wrote an advice column for The Rumpus. The best of those columns, plus some never-before-published columns, were brought together in this collection of questions followed by eloquent essays. The book is arranged in five parts, I assume thematically, though I can't quite identify the themes. But it doesn't matter.

I will admit that I was a bit put off by the first column, when she began answering a relationship question with a story about her dead mother. Oh, I thought, this is all about you, is it? I got over that pretty quickly. Strayed may take a slightly circuitous route to get to her response, but it makes for a beautiful essay.

Her advice is insightful and compassionate, and even when the asker is obviously at fault she will jibe them in the most affectionate way: "I love the way you wrote to me with your searching, scared, knuckleheaded, nonchalant, withholding dudelio heart on full display." ("Dudelio" is a dude-related word she made up just for this person.) Strayed gets you, no matter who you are, because she has also made huge mistakes and has learned from them and is now ready to impart that wisdom. She can also be funny. She begins one response with "I'd rather be sodomized by a plastic lawn flamingo than vote for a Republican, but as I consider your situation, I can't help but quote the former secretary of defense Donald Rumsfeld..."

She's also not afraid to take a hard-line stance when she needs to. She told a gay guy to get out of his fundamentalist Christian parents' house rather than pretend he was straight, and she advised a woman with an abusive older brother to stop seeing him despite the hurt it would cause her parents. She explains why with a deeply persuasive clarity. She is fond of boundaries. "Boundaries teach people how to treat you, and they teach you how to respect yourself."

Some of the questions she received were unanswerable. The most heart-wrenching was from a man whose son, an only child, had been killed by a drunk driver four years earlier. His letter was in the form of a list because he found it so difficult to compose an actual letter, and it didn't even have a real question because he knew his problem was unsolvable. He wanted his son back, and could not have his son back. How can one even respond to such a thing? With eloquence and grace in this case. Strayed rose to the challenge and penned a beautiful, sympathetic response - also in the form of a list - in which she commends the man's strength in making it this far and somehow manages to speak in an uplifting way of all the things his son has yet to teach him. It was truly amazing.

I just loved reading this book, and I couldn't help but think of Ann Patchett. They both write exquisitely perfect sentences and have beautiful, wise insights that they manage to capture on the page eloquently. (Why aren't I as smart and amazing as these women? How does one get there?) Of course, it wasn't written entirely by Cheryl Strayed - it was also written by the many lost and confused and bewildered and hurting people in an astounding array of difficult situations. They were the inspirations for each one of Strayed's pieces of writing.

I loved Wild and still think about it and recommend it and will likely read it again. Tiny Beautiful Things is different because it's not one story, but many stories, and for that reason it may not stick with me quite the same way. But I will remember it and I will recommend it. I will also eagerly await Cheryl Strayed's next work of nonfiction.
Posted by 3goodrats at 11:02 AM