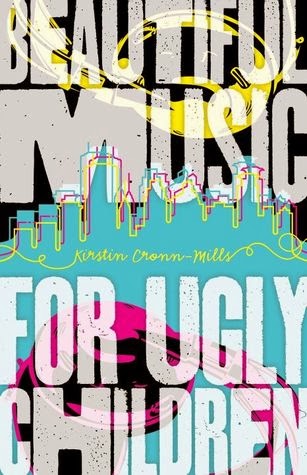 Gabe knows he's a guy, even though he was born in a female body, but convincing everyone else is proving difficult. High school is almost over though, and once he's free he will start living the life he was meant for. That includes music - and he's just scored a gig on a local radio station thanks to his friend and next-door neighbor John. His show is called Beautiful Music for Ugly Children and he garners a following almost immediately. He is still known as Liz at school, but now does the radio show as Gabe, so it's only a matter of time before worlds collide.

Gabe's best friend Paige has stuck by him through the transition so far, but his family is another matter. And some of the kids at school are just horrible. But Gabe finds support in surprising places, which actually made the story even more realistic to me.

There's a moment in which Gabe is slightly tempted to just throw away his new life and go back to being Liz because he feels like he's complicating everything for everyone. But of course he doesn't because he's not Liz, and as much as that would make things simpler for other people, for him it would mean living a lie, living in misery, and possibly not living at all. I think this is a really important point for those who have trouble understanding the trans experience - that it's far more difficult and uncomfortable and miserable to live in their assigned gender than to be themselves and endure ridicule and prejudice that comes with it. When you think about all the crap they have to put up with, that's pretty mind-boggling.

My only critique with this book was that some of the conversations felt forced and fake, mostly between Gabe and his mom. She seemed a little two-dimensional to me, and the rest of his family wasn't especially well-developed either. But that wasn't really important, because this story was so much more about about Gabe and Paige and John and the radio show and all of those parts were really really good. Some of the reviews on Goodreads call this an "issue book" and I suppose it is in a way, but it doesn't feel like an after-school special or anything like that. I really felt like I was getting to know Gabe, who is a kid who is struggling with some stuff but is totally going to turn out well because he's strong and knows what he wants. Despite some of the bad things that happen in the story, it was was inspiring and hopeful.
Posted by 3goodrats at 6:43 PM